Apple Card in the UK

Does anyone reckon there is room in the UK Credit Card market for Apple Card. If it launched what bank do you think would back it and would you sign up?

What benefits would you like to see from it?

when it launches, I don’t see why they won’t just stick with GS. The relationship already exists, GS are already here. It makes the most sense to me. Outside of them, perhaps Starling, or Chase?

Yes I would sign up! I’ve specifically been avoiding getting new credit cards for the eventuality Apple Card launches here.

Benefits wise, I don’t care much for the rewards, but if they can match their fee structure of the US, and the very consumer friendly approach to credit and doing the right thing (they froze interest in addition to payments during the height of Covid, contrast to providers here who still continued charging interest), that’s enough for me.

Genuine question, what are they exactly offering that is unique?
I have read the Apple Card website and can’t really see anything
Most, if not all of the cashback offers are purely US based
The interest rate is nothing special

Anything the good folk on here who know more about this than me, please enlighten me.
It would be much appreciated.
(I do love as much info as I can get on new fintech)

Depends if it provides an open banking API. If it doesn’t, I probably wouldn’t bother.

what are they exactly offering that is unique?

The fee structure seems pretty unique to me. And the app for it inside wallet is very monzo-esque, and I’m sure a better app is something people would like.

I imagine in the U.K., they’d manage to bring some kind of cash back/reward system when using Apple Pay, as they do get a cut of that. Won’t be anywhere near as what they can offer in the US though.

I don’t know how unique the family sharing aspect is, but I’ve never personally seen anything quite like it before. I can add additional card holders to my credit card, but it’s not quite the same.

You can buy Apple Products with interest free monthly instalments. Not entirely unique as you can sort of do this with things like PayPal and Klarna, but they’re very short term.

I leave with the impression that they’re just another credit card, albeit with a better app, more ethical practices, better fee structure and policies and a titanium card as standard.

Thanks for the detailed analysis

Just one other thing, are these benefits dependant on using Apple products, or do they just relate to the Apple card?
(For example, can the app be used on a non Apple product)

Finally, Knowing your love of all things card related I can understand why a titanium card appeals to you

can the app be used on a non Apple product

No, the whole idea of the product is the capitalise on and strengthen Apple lock-in.

I imagine in the U.K., they’d manage to bring some kind of cash back/reward system when using Apple Pay, as they do get a cut of that. Won’t be anywhere near as what they can offer in the US though.

Yes, and we don’t actually know this as obviously the deals Apple have with banks are commercially sensitive, but the Apple Pay “fee” in the EU (and U.K.) is thought to be as low as 0.01%, due to the interchange cap. There is also speculation that they may have accepted a flat fee per card added instead in some EU markets.

Obviously it’s slightly different with Apple Card, as that is a joint venture with Goldman so they can also subsidise Daily Cash from the venture’s wider profitability, but I would expect the cashback to be lower. Cashback at the Apple Store should still be generous as it would be funded at a loss by Apple, I would imagine, in order to promote brand loyalty.

A bit like the John Lewis and Waitrose Partnership card, where the card is run by HSBC but you get quite good cashback for shopping in Waitrose or John Lewis (and much lower cashback elsewhere). The cashback then comes in the form of vouchers for their stores, so it is obviously subsidised by them.

10 posts were split to a new topic: The Newday card

They have been looking to sell or float Newday.

I guess Newday need the contract to replace the business they are losing from Amazon.

GS have shown no aspirations to grow their UK programme and hitting ringfencing deposit caps is only making it harder for them. Would be very surprised if they launch

Ringfencing deposit caps were the issue, and Apple Card would obviously be lending, not something that generated deposits - so not a problem, you would think.

With JP Morgan launching Chase and buying Nutmeg, surely Goldman would want to get a foothold in the market too (beyond Marcus, which is really a bit of an experiment it seems, and a cheap way of raising funds for their investment business). They clearly don’t view Marcus as that important as they haven’t branded it with their primary brand, which is always a giveaway that a company’s heart isn’t really in it.

GS have shown no aspirations to grow their UK programme

They’re expanding their product portfolio this year by bringing their investments platform(similar to nutmeg) to the U.K., so they’re certainly expanding here. 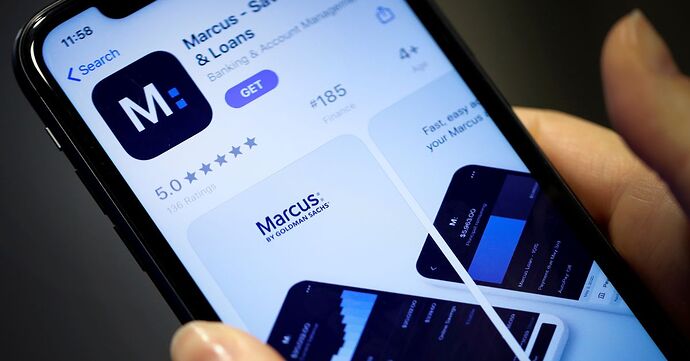 Goldman Sachs (GS.N) will launch an app for UK users of its digital bank Marcus over the following weeks and plans to offer automated investment management to clients in the country by the first quarter of next year.

My assumption was more that given the deposit caps it would limit their ability to make use of the deposits in their investment bank as would be required for the card programme.

The article quotes “We are pivoting more into an investment and wealth provider rather than a full service digital bank,"

So would be really surprised if they do an Apple Card.

Well I’m sure they can raise further capital elsewhere if needed.