If you’ve not heard of Airtime Rewards, you basically get money off your mobile bill just by using your card at selected retailers.

Use my code V63UUDJL and you’ll get a bonus to get you started!

I’d not heard of them.

Looks good but, tbh, not comfortable sharing my data with them for what may be pennies in return.

Got to say, some of the cashback percentages on there are wild! 10% at Trespass, 10% at Gett (black cabs), 5% at Boots, 5% at Halfords, 4.5% at Wilko …heck, even 2% at Argos isn’t to be grumbled at considering how measly cashback credit cards are in the UK. I like that it’s set and forget, too - no need to use tracking links that don’t work half the time or remember to scan an app.

Afraid I’ve already got an account with them @Mathew otherwise I’d have used your link!

I have an account but not managed to ever get my first £10 yet.

Tesco not among the retailers.

I like that it’s set and forget, too - no need to use tracking links that don’t work half the time or remember to scan an app.

Doesn’t support Amex though, so to get the Airtime Rewards cashback Amex users have to remember which retailers Airtime Rewards supports and switch over to Visa/Mastercard for these.

Isn’t Giffgaff the only other one that’s supported?

Mine isn’t supported so that solves my dilemma.

Think I saw Virgin Mobile on there.

I’m with Plusnet, that runs on EE, however, not giving data up just on the off chance it’s accepted via that route.

I think (although have never used it myself) there’s a manual option to receive cash for unsupported phone networks.

Pre-pandemic, with lots of travel into London I managed to earn some cashback just by my choice of where to buy a lunchtime sandwich, but since I’ve earnt very little.

They do offer regular and ad hoc bonus discounts nowadays as well.

They do let you register Amex cards, and say it is coming soon, although I wouldn’t sign up purely for Amex support. It also works with

As mentioned by Mathew, if you sign up with a referral code, mine is DNQ4LEWM you would currently get a £1 bonus if you spend within 7 days.

not comfortable sharing my data with them for what may be pennies in return.

I’ve been with them for a while now and haven’t noticed anything untoward. It’s a slow burner, depending on where you shop, and the retailers supported change from time to time.

I’ve had over £130 so far without changing my shopping habits.

They do let you register Amex cards, and say it is coming soon

They’ve been saying this for at least 2 years though…

Doesn’t support Amex though, so to get the Airtime Rewards cashback Amex users have to remember which retailers Airtime Rewards supports and switch over to Visa/Mastercard for these

Same for Chase it seems due to the numberless card and non-matching in-app virtual card details, despite being a Mastercard. You’d have to switch over to a different MC/Visa for transactions at an Airtime Rewards retailer (so long as the cashback is greater than Chase’s 1%, which I believe pretty much all of the retailers are).

Pay. The PAN (card number) presented within the Chase app is the number I’ve added to my Airtime Rewards app. 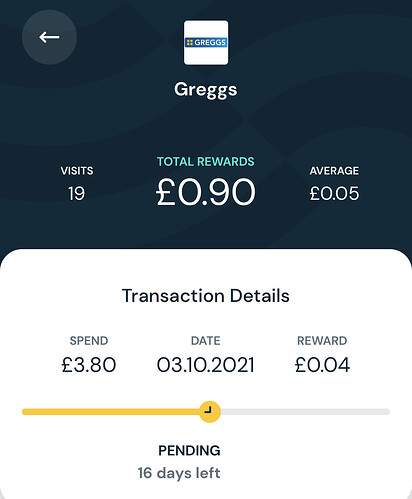 Right yes, it should work for Apple and Google Pay (so long as it’s not one of the few Airtime Rewards merchants that only tracks via physical card), since the card number shown in the app is the one used for mobile wallets. The issue is with the physical Chase debit card, since that’s the one with the different PAN. Fortunately I almost never use my physical card, instead favouring Apple Pay, so that shouldn’t be an issue!

My network want listed and they sent my money via PayPal

My Chase gets tracked with Physical card and Apple Pay. Though my transactions take 10+ days to show up

Tesco not among the retailers.

They’ve been added recently, but it’s in-store and Visa only. However, the reward seems to have changed to 1% (was 5% last week, but perhaps that was a launch offer?)

I have an account but not managed to ever get my first £10 yet.

It’s been a struggle for me. But I’ve always had the mindset of I don’t have to do anything to get it anyway, so it’s a bonus.

That said, with Asda and Tesco recently added, it’s adding up quicker.

Isn’t Giffgaff the only other one that’s supported?

Apparently, there are 10 networks supported, but finding a list seems tricky

Tesco still not showing on my end. Is this only available to certain people or locations?

It seems that way @AirtimeRewards
@ElyzabethSB @Tesco Hey Elyzabeth 👋 Unfortunately not all members will have the Tesco offer available, this is decided at the retailer’s discretion. However, we’re working on having this retailer available to all members in the future! We’ll keep you updated 😊
next page →