Not seen this site before, but I’d imagine this is interesting for some here - 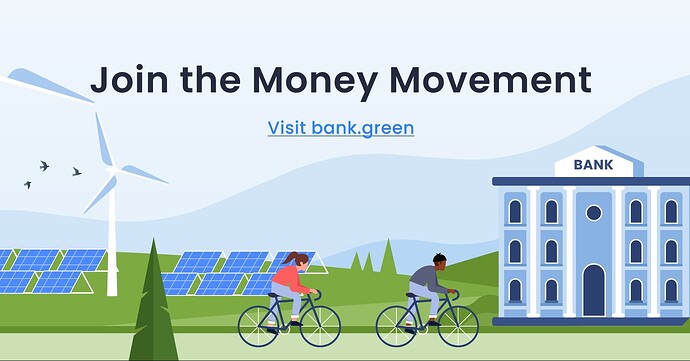 Bank.Green is sounding the alarm on the climate-destroying activities of banks while recommending sustainable alternatives and empowering consumer action.

Surprising, but also nice to see Algbra included on that already too.

Great utility, nice find! And thanks for sharing it!

I’ve seen the Coop pushing this recently. One thing I find odd is how Algbra get a perfect score as an e-money provider - I wonder whom the money really sits with?

For instance Revolut get an average score as they may have a relationship with Barclays - but I’m not sure it’s explicit that this is where the “e money” is kept?

It’s a bit gimmicky, to be honest. There are rather obvious errors and inconsistencies all over the place.

Why do so many building societies show as offering Credit Cards, for example? The only one that does is Nationwide.

They state in the FAQs:

As per regulations, Algbra is required to ‘safeguard’ all customer deposits and funds.

We do this by holding the money you deposit or receive in a client money bank account, which we manage on your behalf. We have client accounts with banking partners that are ESG compliant.

I would personally like to know exactly who those partners are.

Doing a little digging, they only reference 1 entity which is Modulr FS, same as Revolut, but they’re surely not the banking partner?

Edit: I’ve asked on chat. Will report back with the answer.

ESG is an interesting term - I’ve been looking at ESG ETF’s having divested some bank shares - some have some quite questionable company shares wrapped into them!

So it’s a campaign group I’d not heard of. Difficult to argue with the premise of “green” banking principles, but it’s unfortunate that the feature list of their chosen banks is, in large part, a pretty poor copy & paste job. (Credit cards attributed to institutions that patently don’t offer them , for example.)

The blog is understandably preachy sprinkled with hyperbole but good luck to them. They’re a campaign group - it’s what they do and I’m sure they’re message will chime with many.

Beyond that, I don’t see them being much of a resource until they can deliver accurate data on our financial institutions.

I don’t see them being much of a resource until they can deliver accurate data on our financial institutions.

The data on financial products isn’t accurate, and they should probably fix it, but I don’t think that’s their purpose.

They’re primarily assessing whether banks are using your deposits to fund fossil fuels, and their aggregate data on that, at least the few I’ve checked that I’ve done my own research on in the past seem to be pretty spot on, and the banks are rated about how I’d rate them on that metric.

I think that’s all they’re trying to do here, so if it’s something you care about, you know where not to put your money, or at the very least, who to favour, as many of the good choices don’t typically have a good digital experience so you have to find a middle ground.

On that basis, right now, if you want it to still be a bank, Monzo probably tops it, but it may not always be the case. Monzo do make some commitments but they’re quite hidden and by no means far stretching when it comes to other ESG values. Their lending policies for instance leave a lot to be desired.

Their lending policies for instance leave a lot to be desired.

Oh yes absolutely. Remember them promising loads about the unbanked? I wonder how that’s working out for them? They’ve gone extremely quiet about it.

More weirdness in the data. Why are Alliance & Leicester and Abbey National listed? Those brands haven’t existed for over a decade now, in fact Abbey National for 20 years since they rebranded as Abbey prior to the takeover by Santander.

Makes me question how much I can trust any of it if there’s such obvious problems with their fact checking.

The brand still exists to some degree. I never touched the trust fund my great aunt set up with them for me. I still get branded annual statements from Abbey National (Santander on the envelope though)!

I think that’s all they’re trying to do here, so if it’s something you care about, you know where not to put your money,….

Yes, and I do applaud the initiative, but as @WillPS points out, there are so many inaccuracies, that for fintechers at least, the narrative gets overtaken by the poor quality content.

Difficult to argue with the premise of “green” banking principles

Is it? I think it’s pretty easy to do so:

governments around the world have emissions reduction plans. Only the Netherlands decided that companies play an active role in that so far (via the courts, not actual policy). Every other country on earth acknowledges it’s not industries’ role.

The government has the job to regulate NetZero into fruition with a mixture of subsidies, investments and regulation.

Edit: I’ve asked on chat. Will report back with the answer.

Forgot to report back. This was their answer:

Thank you for your patience and my sincerest apologies for the delayed response.
﻿
﻿Our two big partners are Clear Bank and Bank of England, both of which have signed up to our Ethics and Values policy.
﻿
﻿I hope this answers your question? Please let me know if there is anything else we can help with!

Bank of England have signed up to their ethics and values have they? Pretty bold claim.

It’s certainly an odd way of phrasing it. I imagine it’s less they’ve signed up to it and more that the way in which they operate is compliant with it, thus forming an accord, so it means the same thing in terms of the result.

But who knows. Maybe it is exactly as they say it is, literally.

I get Starling vibes from their customer support, so I suspect it’s a slightly misinformed agent. At least they actually followed up with an answer after initially saying they’d need to look into it and get back to me. When I’d probe Starling when they first launched they did the same sort of thing, only they never actually looked into it or made an effort to get back to me.

Here’s an interesting one, NatWest get an angry face but RBS get a “meh” face.

At a guess, they’re probably unfamiliar with the corporate structure. Bank.green is an American thing after all.

AFAIK with the few I’ve checked myself, is they’re crawling the banks own impact reports and comparing them with national and international statistics. NatWest seems to pull from NatWest group as a whole, whilst RBS is pulling just from that consumer branch of the company. You’ll note Coutts score similarly to RBS. So it’s equally possibly, despite NatWest owning the RBS group of financial institutions that they’re being run a bit differently. It’s more likely because RBS (and their brands) branch of the company alone isn’t one of the largest contributors, but NatWest group as a whole, which will include the RBS arm, are.

I’ll do some digging.

Here’s an interesting one, NatWest get an angry face but RBS get a “meh” face.

Because it’s a load of poorly researched bilge.