Some months ago I came across something called “Bip” and signed up to be part of their pilot. A couple of weeks ago I received an invitation to download the app via Apple TestFlight but only just gotten around to doing so.

In a nutshell it appears to be a bog-standard credit card, albeit sans card. Made for digital wallets only - both Apple Pay and Google Pay are supported. You also can add it to Curve.

Only downloaded last night so early days. The sign-up journey was straightforward enough but felt like it went on a bit. App is clunky. You’re supposed to eventually get app notifications but they’re not available in this TestFlight version (email and text are). There are few bugs which I’ve fed back.

I can’t seem to find anything revolutionary save the fact you don’t get a physical card. Good for the planet.

From start to end with the card in my Apple Wallet was about 20 minutes. The facility is issued by New Day. Just don’t borrow on it… they charge 29%

Here’s a couple of screen shots in the app:

And here’s what it looks like in Apple Pay: 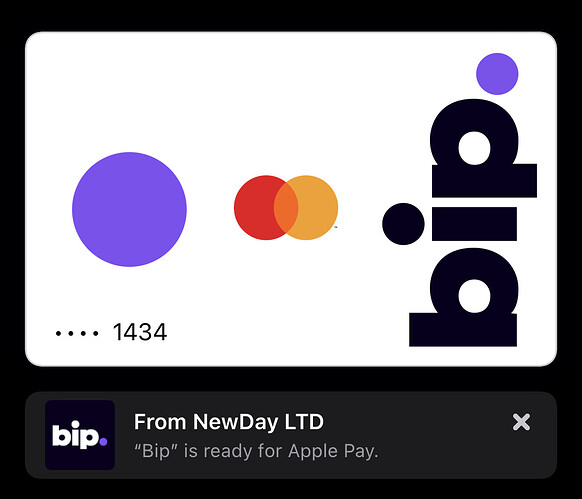 I like the idea behind it. Instant access to credit with no card to carry. I think it’s brilliant but I just recently got rid of all my credit cards so it will be a no from me but I think this will be very popular

I have high hopes that this will be the start of a set of improvements for the NewDay platform of cards.

It may be where Bip development is a useful testbed for new technology, which they can bring across to the other brands.

Things like transaction notifications for all card activity would be very good, and still relatively rare in the credit card market outside of Amex.

Does it offer the normal up to 56 days interest free period on purchases?

The website offers the chance to join the list, but no insight to the T&Cs relevant to the agreement.

One thing that confuses me with a lot of new of fintechs that have been propping up recently is just how much prominence they seem to be giving the MasterCard logo in the branding and design.

Makes me wonder if there any ties to MasterCard with some of the newer players. Zen for instance heavily feature the MasterCard logo in their branding. It gets the same level of prominence as their own logo both on the website and in app. The app has a nice animated intro when you launch it that features the MasterCard logo too. It’s quite a bizarre trend.

Does it offer the normal up to 56 days interest free period on purchases?

Your statement is issued monthly, and your payment is due about 17 days after the statement date. If you pay the entire balance from your last statement by then, no interest is charged. So it’ll be around 47 days interest-free.

Presumably they have the right to use it and it adds that trust, now that big banks have taken on MasterCard in the U.K.

Here’s a copy of a redacted version of my credit card agreement.

One noteworthy positive is Bip charge no foreign currency transaction conversion fees. In fact they don’t charge any fees at all. For anything.

It’s just I remember seeing a new launch card a while back where there was NO interest fee period.

Doubt if it took off.

I already have five cards so don’t need any more.

I was going to say this @N26throwaway, until I saw it had already been posted!

It probably does work quite effectively to build trust that it’s a “proper financial product” rather than a fly-by-night operation.

Mastercard won’t let just anybody give out cards on their network, you do have to commit to all the rules around chargeback, etc.

Customers do vaguely realise this, so it adds some credence and helps them realise that their money is protected to an extent, encouraging usage.

I’ve always thought it was “fly-by-night”, alluding to something being unreliable and potentially “here today, gone tomorrow”, in the sense that they could vanish overnight without a trace and you wouldn’t even be that surprised?

I must admit, I’m not certain though. 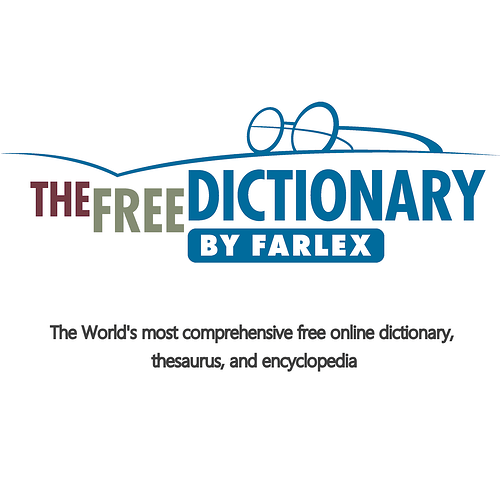 fly-by-night in phrases and idioms by The Free Dictionary

Maybe fly-by-eight as rather than flying by on the straight and narrow, these people fly on crooked lines like an eight…

Could be fly by kite, too, as in the kite, that - unlike a sturdy plane -, is totally unreliable, and driven hither and tither by the wind.

There are many possibilities…

Would it be usable for hotel and hire deposits/holds?

This is what I have been thinking because all places I have visited have always asked for card. Would Google Pay go high enough for some deposits?

Is anyone here that’s using BIP frustrated by the state of the app at the moment on iOS. It’s stressing me out. Glitches and Bugs everywhere

I’m not using it, but I suspect that’s kind of the point.

Bip looks to me like a testbed for a new New Day platform, to be later rolled out to all their brands.

They are clearly trying to work out the kinks under the Bip brand first.