Given that iPad apps are omitted by quite a few fintechs, I wanted to start a thread on iPad apps to discuss the apps available from those who do have one. Gauge how many of us use iPad apps and if we’d like to see others create one too.

This is also a little test of tags feature to see how they can be used for threads like this.

Before I begin, I’d like to reference this chart from Starling Bank that outlines the different stages of an iPad app 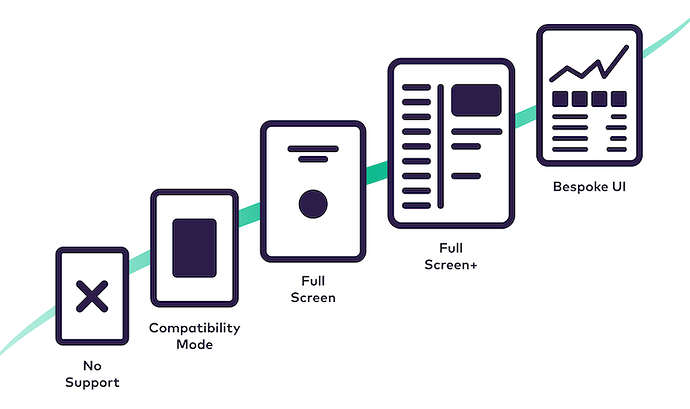 image800×475 20.7 KB
Personally, I wouldn’t be satisfied settling for anything less than Full Screen+. As lovely as a bespoke UI would be, Full Screen+ gets the job done, and does it quite well.

I’ll start by summarising a few.

I think, when an iPad app is done right, it’s a great tool for your banking needs, and I would like to see others adopt them. Blown up iPhone app’s are better than nothing, but I’d really like them to follow in Freetrade’s footsteps here. Or even push beyond them with a bespoke UI.

A web app would be a compromise, but I think where those seem to fall short, is that, with the exception of n26, you still need your phone with you to authenticate, which isn’t going to be an obstacle with a dedicated iPad app.

Please share and discuss any other fintech iPad apps you use below, or whom you would like to see make one, whether or not you use them and add tags for them.

I’d be happy for the discussion to expand into legacy banking apps here too, because a few do make some good iPad apps that take full advantage of the real estate.

I don’t want to derail this conversation, but it seems the notion of developing for a “tablet” always lands upon iPad, with no mention of other types. Is the tablet market so fully-owned by Apple that Android tablets are just not even considered for this kind of expansion? Do they even exist?

I ask this from the perspective of having an old iPad that continues to cling to usefulness (eg. Freetrade app) so I’ve never thought to look for an alternative/replacement, but I am much happier with Android on my phone since escaping the costly iPhone process, so just pondering if that’s an avenue to go down, and/or if fintech apps will embrace that direction too…

I use Starling on the iPad as a backup. Because starling manually approve all re-installations it’s necessary to have it on multiple devices

As an android used, I think the answer to that question is: yes, tablets on android are not common.

I still have an Android Nexus 7 tablet, effectively now just a pointless piece of scrap sat in the bottom of a draw. I suspect it’s now incapable of operating any app with any sort of real effectiveness.

Google and developers don’t prioritise tablets because if you go by the statistics hardly anyone uses them and their sales are in decline.

Apparently tablets make up less than 5% of all devices used online.

I’m an iPad user but given a choice I’d rather have ability to login through a website than have an iPad app. 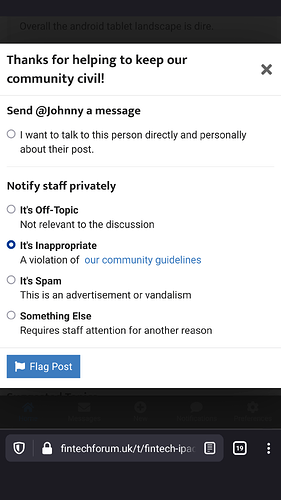 Starling on the iPad as a backup. Because starling manually approve all re-installations it’s necessary to have it on multiple devices

It’s stuff like this that makes me want to buy an iPad!

I use my phone for everything, and my laptop for “work” or professional things, or any time I want a big screen. So I don’t feel I really need an iPad (even for content consumption, on the go I’m happy to use my phone and at home I’ll use my laptop or the TV). But then it would be very useful to have activated backups of my apps in case something happened to my phone.

Because Starling’s online banking is reliant on app approval, it is no substitute when your device is out of action; as you say manual approval means you can’t just reinstall and get back into your account immediately either. So I am stuck not using Starling for significant sums as a main account due to the risk of getting locked out.

But then it would be very useful to have activated backups of my apps in case something happened to my phone.

I do this. But because I often travel with both my phone and iPad (so potential to lose both together) I use an old spare iPhone always kept at home as a backup device instead of just the iPad. All it really has on it is an installation of my password manager, email app, and 2FA app. Can recover any of my accounts from this.

It still wouldn’t work for Starling, completely, as they manually verify selfie videos before you can get back in to your account. To be fair to them, they usually do this within a few hours but I always think that a few hours might be a long time in an emergency.

Can you only have Starling app authenticated on one phone at a time?

No, Monzo allows only one iOS device and only one Android device at a time.

Starling allows several devices, I’m not sure of the exact limit.

I concur. I have Starling on two android phones.

I think Revolut only allows one device

You can have Revolut installed on multiple devices. I have it on both my iPhone and iPad. Unfortunately though, there’s no native iPad app so it’s just the scaled up phone app.

Apps that only allow one login are my pet-peeve. WeChat is one of the worst offenders because you need to manually send an encrypted message log to the server that doesn’t include images AFAIK, and then redownload it when you sign in on a new device. Then upload again to swap back.

Some financial apps that only allow one device login are:

I’ve removed that from my post now to avoid misleading people.

Interesting, my grandparents tried installing it on both their iPads and iPhones (they have one of each) and it seemed to become logged out on the other device. This may have been due to lack of use, for security, in case the device was no longer in their possession or something - so they are not necessarily a good example.

There must be some complex security rules behind the scenes.

To be fair to them, they usually do this within a few hours but I always think that a few hours might be a long time in an emergency

I’m going to take exception to that and say it isn’t good enough. When one of the points of Starling was to be a better modern bank the fact that it can take hours to verify your login when it’s instant for the likes of RBS means they’re dropping the ball imo.

Anyway on the topic of iPad apps, the RBS / NatWest app is one of the best I’ve used. I think it probably is classed as a ‘full screen+’ app by the diagram.

NatWest is one of the few good banking apps on iPad! I would actually describe it as more of a bespoke UI, given that the side bar is used as a separate interface for other options and controls rather than Just navigation.

Nationwide is another one I would describe as a bespoke UI too.

I also still reminisce over the old Barclays app for iPad. At the time, that was a fantastic experience on iPad. A bespoke UI that looked great and took full advantage of the display size. The blown up iPhone app that replaced it was a real shame I think.