Just updated Hyperjar and it now says Kids App in the title. Also within the settings there is a QR code to link their version of the app to my main one.

The Android equivalent doesn’t have the QR code option yet. Just signed up for the beta app to see what happens.

I have HyperJar Kids Cards, but on Android.

Perhaps, once they launch it, I won’t get the constant, “Dad, how much have I got left on my card?” questions

Hang on a mo. After posting above I checked the android version and in the description it says this,

Can’t see a LINK feature or button yet though. 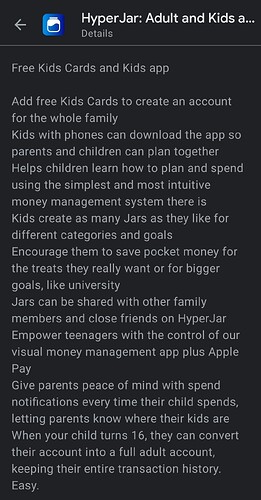 Just got the email from Hyperjar announcing the kids account app.

Still no QR code in my Account → Kids Card though -

- the Android Hyperjar app just updated and the QR code is there. Both kids (one on iOS, one on Android) now set up & running. Cards in Apple Wallet & Google Pay too.

I have no email, no android update in Play Store, and no idea of any QR code.

How did you do this please and what version of the app do you have installed on android?

And after I sent that, an update appeared in Play Store and QR code now visible.

Need kids back from school now

Was not a smooth action as needed the action of customer service staff within app live chat, however, they did deal with it expeditiously.

The issue was around the app asking my kids for their email address, and then saying that it doesn’t recognise it (and why would it as it’s never been asked before) so the NEXT button was not appearing to continue the link to my account.

QR code then also disappeared as the app considered the Kids Card linked.

Anyway, was all resolved within a few minutes and the kids can now see their balance, live in their own app.

I thought I read somewhere that they could create their own Jars for savings etc., however, this feature does not yet exist in the Kids App, so they cannot save money separately from their spending jar, which is a shame and a miss imo.