Has anyone went to SEA and EEA on 3’s Go Roam? Specifically along the lines of Vietnam, Singapore, Hong Kong and in general for the EEA Planning to go to Hanoi for a month after COVID is finished, on similar circumstances to my last excursion on the other forums; 3 seems to be doing well with their 5G rollout/4G repurposing making them very viable here (also about £10 a month for unlimited contract for 12 months, if you get cashback via a site) but I’m curious if their agreements abroad are just for show or if they have substance

Alternatively, what’s the best network of MVNO for roaming? Or should I just move to Vodafone/Three domestically and use eSIM here, with a physical SIM abroad

I use their network abroad a lot, for instance I’ve been in Austria for around two months now and there was a period last year when I was here longer and I’ve never had an issue with extended stays. My partner’s Austrian network on the other hand keeps sending her threatening texts whenever she uses her phone in the UK for more than a month.

Data is capped at 20GB/m, otherwise your allowances are the same as at home.

The only thing they’re a bit rubbish at is providing access to newer network technologies. They’ve only recently switched on 4G roaming for example. Also, I’m in a country with a Hutchison (Drei) network. 5G is available here, so why on earth can we not use it when we’re roaming?

Yeah, I don’t get why they can’t leverage the fact they share the same holding company

If I were Three, offer a like-for-like with other networks to provide roaming to their users on the condition they take yours (other major multiple country networks)

How is the speed in Austria?And have you ever been outside of the EEA on roaming? Wondering if they become a little less lenient in countries where they don’t have a domestic brand themselves

The problem is that if you are in the EEA for more then 63days they will charge you for roaming, as the sim card needs to be in the UK for more time than it is used in the EEA.

This is catching a lot of people out.

Three also rate limit as well outside of the EEA, and in the US its unusable as i was getting GPRS speeds some states and in Hawaii it wouldnt even work… so gave up with their roaming and service.

The problem with roaming is that it costs money and each network provider charges for you to access their network.
If you want Data roaming only and have an esim enabled phone look at TruPhone (others exist) but for voice and sms it gets more complicated, with wholesale rates etc coming into play.

Welcome @mozzauk , good to have you aboard.

TruPhone looks really expensive, I don’t actually use a lot of data as I’m normally tethered to WiFi or turn data off for everything (currently w/ Zevvle) but honestly if I start making calls (which I have been forced to do recently w/ university / doctors appointments), suddenly I might as well pay 10 a month for Three and be able to use unlimited data instead of 1-2GB a month before it becomes vastly more expensive on Zevvle than it is for Unlimited Data / Calls.

have you ever been outside of the EEA on roaming?

Yep, Moldova. They’re not covered by ‘Go Roam’ and it was terrible. Service was acceptable but data was £5/day and you had to purchase an add-on that reset at midnight UK time. I ended up spending quite a bit on data there. If you didn’t buy the add-on and just used PAYG the costs were eyewatering.

How is the speed in Austria?

Actually not too bad on 4G+: 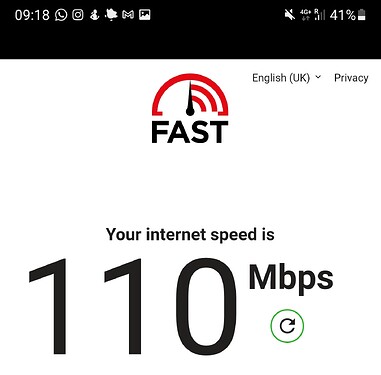 Actually, TruPhone Business doesn’t look that bad. Seems you can get multiple numbers linked to a single SIM, with data included that will run across pretty much every country not subject to US sanctions

Unfortunately they don’t list a price and, I’m far too embarrassed to ask on the off-chance I can’t afford it (as it’s for business people with a heavy flight budget who’s time is worth a lot more than money, ofc) so if anyone feels like asking for some pricing quotes for me, it’d be cool

Their US numbers are classed as VoIP. I was unable to use mine for signing up to things that require SMS verification.

For the business plan? For the record you can get a T-Mobile eSIM via the T-Mobile eSIM app + (US) VPN to verify things and you should be able to port that number Google Voice so you can keep it

I used it to verify my Venmo, for instance :^

For the business plan?

Only downside of Google fi is it has to be activated in the US the first time. Last time I went home to see my family I got myself a Google fi SIM card And this month they just launched an unlimited international roaming plan

Some of the countries I go to, I just buy a local sim. I found the last time I went to Egypt for example, after getting through immigration into the arrivals lounge, all the major telecoms players had pop up stalls selling data sims at 13 Euro for 20gb in the case of Vodafone (Egypt).

South Africa can be a problem because of RICA:

unless you want to run the risk of buying an unregistered sim from a guy on a street corner, you have to buy a local sim in advance of arrival, usually through a legitimate telecoms provider. I used to buy mine in advance from a Vodacom at Cape Town airport about a week before arrival and pick up once I’ve landed but I believe they have stopped their buy pre-arrival service.

And of course as others have mentioned, if you’re with Three and in a ‘Feel at Home’ country, you can make and receive calls at UK rates.

Maths isn’t really my strong suit, can someone on the thread work that out as cost/GB

Don’t think you can aggregate up the 6p / MB as should expect it to be cheaper at the GB level - economies of scale et al. (As @ndrw points out below

Daylight robbery if you ask me

Daylight robbery if you ask me

It’s very expensive on PAYG. When I moved to the UK I had it not for data but because for £5 per month you had a secondary US number that (at the time) people could text message. The other thing about Truphone is that pick the CLI you present based on the number you dial

They now offer esims but in my experience for the US, overall the esim offer from t-mobile is best value and is designed for tourists.

Equally o2 and EE offer decent roaming speeds in the U.S so most people probably don’t need to worry about it.

edit… the other thing about Truphone is that they have a presence in most countries. When I 1st got them they didn’t do 4G but they also didn’t need to. By having a POP in each country they don’t VPN back to the home country (like normal carriers do) which means you get full speed in the country your roaming in (technically with Truphone you are not roaming)

Planning to go to Hanoi for a month after COVID is finished,

Prices for Vietnam sim cards are mostly the same, but the network coverage is not! Click here to find out the best ones for tourists...

Essentially from my own position, Continental Europe aside which I no longer visit any more anyway and haven’t done so for several years, most countries I go to, I just buy a local sim card because I’ve found it’s generally cheaper than attempting to use my own UK number. Apart from my iphone XR, I also use a dual sim Nokia 7.2 so using another sim card isn’t an issue anyway. Between the two phones, I can keep in contact with whomever I need to, mostly by WhatsApp when abroad in any case. And no, no one at any airport has ever questioned why I’m carrying two phones.

For me the only issue with swapping a sim out would be iMessage. Unless you have a dual sim iPhone swapping the sim deregisters your number from iMessage and then registers the new one.

Last time I bought my Google Fi sim back with me I popped it in a Moto G Play. Carrying 2 phones is never an issue for me as I always carry a bag anyway.

Side topic: I did also notice last time I was i NYC with a friend who was tetherred to my UK phone that EE WiFi Calling works. I did some further testing and found that if you tether your phone to a UK EE device that’s roaming you get WiFi calling and thus aren’t charged for incoming or outgoing calls