You can turn the bottom menu off

Ah, it’s under the interface section (no navbar) for others

One of my own personal web projects involved a lot of experimental approaches to navigation designed around the mobile’s Goldilocks zone for thumbs. Illustrated here by Lux Optics as the reachable plains. 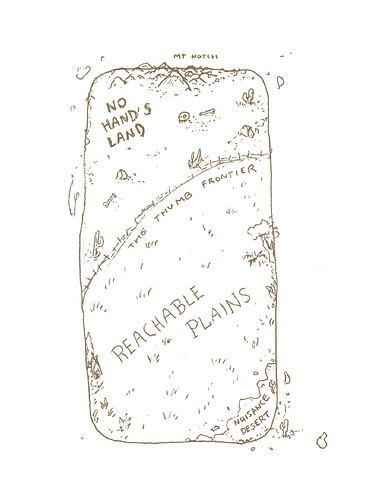 From your description, it’s possible the safari changes will interfere with the approach I went with. Will need to test it when I get the previews, but annoying if the new interface obstructs objects now rather than pushing them out of the way.

I expect any little bugs will be ironed out

Ah, thank you! I suspect the intended behaviour, even from tapping, is depicted in your first screenshot, as that’s how things work on iOS 14.

Second screenshot is likely the bug.

Thanks just hid the toolbar.

That could just be a bug. I imagine this should come across as nothing more than a UI update to the perspective of the web developer. the way the browser functions should remain the same, so web apps should continue to respond accordingly once bugs are ironed out. So no changes should be necessary for your web app to continue to function correctly.

If you’re using fixed elements, I suspect the safari transitions will result in some janky changes to your page layout, but nothing major. You can correct for those things though, so the adjustments are fluid transitions.