So, Jaja is closing all Pioneer accounts. Bad move, but it is what it is.

I thought I’d chance it for the signup reward promised way back when. 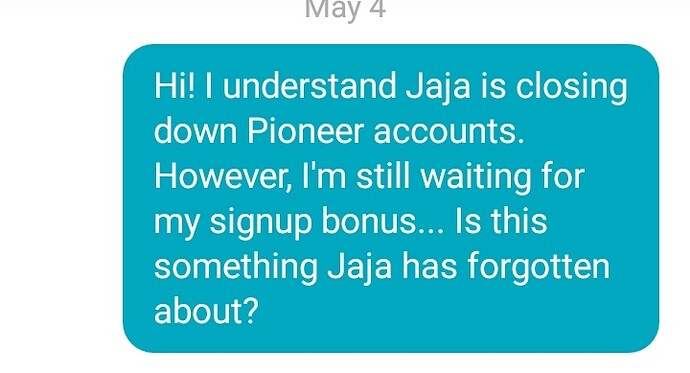 And back came a somewhat unexpected response… 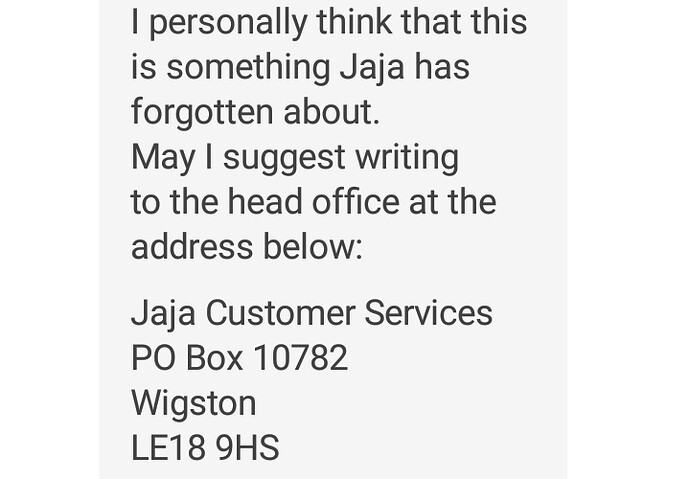 I mean, I know CS tries to give a bit more of a personal touch these days, but this does feel like someone dissing their own company!

I was on the JaJa Waiting List for like forever, and eventually told them to shove it as I was not that desperate to use their product over my cards from established providers.

I never understood the point of Jaja. Pretty much all cards have apps now so what made them different?

Pretty much all cards have apps now so what made them different?

To be fair to Jaja, their app is streets ahead of the criminal* designs that come from MBNA et al.

The thing that got me interested was the ability to assign a chunk of your limit to another cardholder. Plus a few other ideas that seem to have fallen by the wayside.

If I think of my Amex card, no way would I want say a child starting at uni as a cardholder, because the limit is too high. But I’d happily give them free rein with a chunk of it at my expense.

It’s sad that credit cards are still waiting for the level of innovation Jaja was promising. Tymit is certainly stepping up more and more, but there was a real feeling early on that Jaja could disrupt. Now a damp squib

Even Tandem was better.

And that’s saying something

Even Tandem was better.

I had a Tandem card until they decided they wanted to start charging their ‘membership fee’. And when I saw the message posted by @Gaoler above I noticed the address of Jaja Customer Services: in Wigston. Here’s the address on the back of one of my Tandem statements:

Not exactly the same, but spookily similar

PO Box so likely the address of a Royal Mail facility - it will be forwarded on elsewhere.

JAJA runs on a much more modern platform by the looks of it. You can pay it off and it instantly reflects on your balance, something that can take days with a legacy bank.

Either that or some sort of processing third-party used by many businesses.

I’ve noticed a few envelopes with return addresses in Wigston, including banks.

So they are more like Amex in a way?

And that is why I like Amex, it’s real time on both spending and payment. Every time I’ve paid my Amex card bill via my Starling account, the balance adjustment has been immediate. It drives me nuts on my Lloyds credit card, that it takes between 24 and 48 hours to reflect the real balance in app. Same with Nationwide, and that has taken several days before now to update.

My opinion is that the Amex app is very good, but that’s just my opinion!

Haven’t used Amex so can’t comment on that, but according to @Topsy2 they are indeed real-time like Jaja. That’s about the only good thing about Jaja tbh, everything else is very average. They definitely didn’t capitalize on their “fintech” aspect.

My opinion is that the Amex app is very good, but that’s just my opinion!

Indeed, and now they even have Dark Mode!

I though it was a bit cheeky when a staff member from Monzo remarked that the Amex app was “only a few pages” over on their community, or words to that effect, implying that it was easy to implement.

As a user/customer, I don’t care how technically difficult it is to implement a feature - I just want the feature. To sling mud at Amex when Monzo don’t have it, under the reasoning that the Monzo app is more “advanced” is ridiculous. It makes no difference to me as a customer.

Also, you do have to ask, the time since iOS 13 was first in developer beta is now a month off 2 years. Why exactly should it take quite so long?

I’ve just checked my position on the waitlist for JaJa, as I do every couple of months.
After getting on for a year now, I have actually gone backwards

Don’t need to understand the point, necessarily. It looked like it’d be a mobile first experience, they were doing good things as ASDA’s credit provider and were taking on a large portfolio.

Think about it this way, it seemed like they build a good team and had great execution potential. Oh woe is me, that they still botched it.

5 posts were merged into an existing topic: Jaja 2.0

No love here for Pioneers. “Some of you have been on the waiting list for a long time”. Yes, and some of us were using Jaja quite happily until you shut down our cards. Would it have hurt too much to write a different email?

Have completed the interest form, let’s see what their 2.0 offering turns out to be, but not impressed so far.

Would it have hurt too much to write a different email?

This. I already have a card as well.