Customers of 30 UK banks, building societies and credit unions can continue to use post office counters for basic banking until at least 2026.

The new deal, which covers three years from next January, is seen as key in securing the future acceptance of cash.

Individuals and small businesses can withdraw and deposit notes and coins from their accounts at 11,500 post office counters.

But one leading bank - Monzo - is not part of the deal.

Monzo has not signed up to the current agreement, having argued that its customers prefer to use its app rather than a post office.

The Post Office said £3bn a month was deposited and withdrawn over its counters. 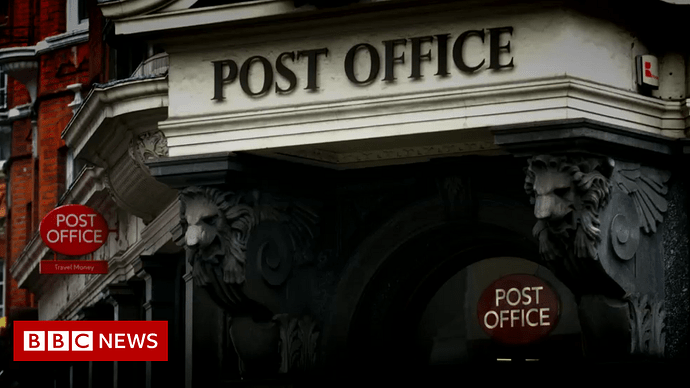 Customers of 30 banks and building societies can continue to use post offices to deposit cash.

Monzo has not signed up to the current agreement, having argued that its customers prefer to use its app rather than a post office.

Never been able to get my app to accept cash deposits

That should be AIB and AIB NI, presumably!

AIB GB (trading as just AIB) is AIB in Great Britain and only provides business banking.

AIB also operate in the Republic of Ireland under the name of just plain AIB.

The bit in my first post was copied from the BBC News website. I’m just the messenger

This is now basically a green-light for branch closures because “the Post Office will cover it”.

After that, the extremely low usage of cash will likely cause banks not to agree another framework agreement, so banks will no longer offer Post Office services.

Of course, today the news is being spun the opposite way as “access to cash secured for the future”!

imo though, bring in the central bank Digital currency and kill off physical cash for good. Today

And when you go abroad ?

When I go abroad I will use my debit/credit card and not need cash still. My understanding is that any CBDC would fit within our current system (although also be able to bypass it for wallet to wallet transfers). It’s been a while since I read the BoE paper on them, but it wouldn’t really change much other than some really beneficial things:

The only countries this would not work is where their currencies aren’t convertible (something like Iran, where you’d have to take cash and then swap that in the country for local currency) but countries closing themselves off from our financial system are ones we should be aiming to cut tourism to anyways. Anyone that really wants to go there can get USD from exchanges and exchange the cash in person in those countries.

I guess there’s also countries without permeance of a debit/credit card network like Japan etc, but a CBDC doesn’t stop us withdrawing cash abroad.

The only time I use physical cash abroad, is if I visit the US and then it’s only to use for tipping (yes sometimes one has to tip the bar staff, especially in some of the bars I frequent!) but otherwise, it’s my Starling debit card only. I’ve just returned from a week in Sweden and it was a completely physical cash free trip, my Starling debit card paid for absolutely everything without a hitch. Clearly the biggest bonus was, not having to worry about currency exchange and not being left lumped with SK at the end of the trip.

I fully understand a lot of people here in the U.K. are still using physical cash as a means for everyday transactions and undoubtedly the Post Office will be a huge source of help for many, but, and I think I can also speak for my Wife here too, we’ve moved on from physical cash, we just don’t use it because it’s an absolute pain in the ass. It also stinks and is covered in everything from cocaine to faeces, not my two of my favourite substances if I’m honest.

I’ve just returned from a week in Sweden and it was a completely physical cash free trip, my Starling debit card paid for absolutely everything without a hitch.

I’m surprised tbh, expected everything to run on Swish

As a side note, I think this is something we need to ensure as a general thing: we need MasterCard/Visa semi-public in that all countries should have both in tandem (at the least) as global payment methods. Merchants should be required to support both, if we get rid of cash

I know “some local payment methods may be cheaper hurrdurr” but a country entirely cut off from foreign money because no one accepts Visa because Swish doesn’t have chargebacks and charges 0.1% instead of 0.2% + 3 kronor is wild

I fully understand a lot of people here in the U.K. are still using physical cash as a means for everyday transactions

Seems like a them issue in all honesty. Never seen a valid argument for it

I had a, purportedly homeless, woman approach me yesterday asking for some money. The look on her face when I said I don’t carry cash.

I would gladly carry a few quid to help the genuinely homeless and vulnerable I may see on my travels. The trouble is, there are too many scammers/scroungers out there who aren’t genuinely homeless or in need, who just see it as easier money than working

The look on her face when I said I don’t carry cash.

I get tempted to say this - but given the prominence of mental illness and substance abuse amongst some of these folks I consider it to be asking for trouble.

Or all the countries where the people take cash. USD is still pretty much the universal currency in a lot of the world

if you want to help the homeless, download TooGoodToGo and get a lunch meal or something from Nero, Pret, Starbucks, Soho etc

I got 9 mac n cheeses from Pret the last time I got one (for four pounds) and went around giving it to the homeless.

Or all the countries where the people take cash. USD is still pretty much the universal currency in a lot of the world

this is the same argument as those people who say “my barber only takes cash” yeah but who cares, they’ll catch up as the rest of us abandon it. why mention it? it’s such a non-issue

and it would still work, you’d just exchange your CBDC for foreign currency. you’ve just told me that you didn’t read the BoE CBDC documents at all without telling me directly; it literally says in there in b/w: we are currently working methods of wholesale currency purchases and cross-borders.

so USD is irrelevant

The way I see it you can’t be totally sure but it’s easy to superficially judge. There will instances of mental health, relationship breakdown and even addicts taking substances to block things out.

There will be scammers too but I doubt few people opting to live on the streets.

The vast majority of people have experienced and are in the midst of personal crisis and any drug or alcohol abuse issues are as a result of trying to cope with that.

Very few people just choose to use drugs, something has happened to them that has pushed them down that road and made life difficult.

this is the same argument as those people who say “my barber only takes cash” yeah but who cares, they’ll catch up as the rest of us abandon it. why mention it? it’s such a non-issue

Do you travel much outside of major tourist areas?

I’m not saying any of the ideas you shared are wrong or aren’t going to happen. Just that USD is still king when it comes to doing anything outside major developed cities

Going through the shanty towns in India, cash is king.

You’ve stirred some horrible memories there

I went to India in my 20’s, a couple of times, I’ve never been back since. But you’re right, in some countries, and virtually the entire continent of Africa (except South Africa and a couple of others), the USD is effectively the de facto currency outside of their own local paper cash.