Maybe one of the unsung heroes of the Fintech world.
Whilst much can be found and read about the bigger players, Monese seems to go about it’s business sitting quietly under the radar.
In my opinion (and I will admit I am a little biased) they are very much underrated.
They offer quite a lot that some of the others don’t.

I would be interested in the thoughts of the community regarding Monese too.

I used to have an account with them. Certainly gets less discussion. I’ve found all that you listed and more can be catered to by Revolut (you can spend in any currency off a card, and can have more than one card if you wanted to treat it like this) . PayPal integration/joint accounts are the main other points of distinction.

The UI is pretty good though. If you just want a fintech current account it certainly gives the others a run for their money. They offer cash services which of course Revolut do not, pretty expensive for a standard user though.

It also takes a very long time to get a response from their customer services. Whether it’s better quality for the wait I’m not so sure.

I agree that some of their services can be a little costly, especially ATM withdrawals if you go over the limit (which thankfully I don’t

)
I tend to use Monese as an everyday spending account with an odd direct debit for other Fintech products
(Namely paying my Tymit C/C) and I think it’s the pure simplicity of the account that appeals to me.

I do however really like the Avios integration, much quicker than logging into BA to check on my points

Forgot to mention that alongside PayPal!

For me, it’s this and EUR to GBP conversion. As long as you do the conversion between your two monese accounts, there are no fees and no markup - cheapest route I’m aware of.

In the unexpected features camp, I’ve found their Avios integration to be a great way to keep track of my account. Edit: Now I’m reading the thread through properly, I see this has already been mentioned!

I also like having a separate euro debit card, although I do also have a Starling euro account and an account with KBC in Ireland which has it’s own debit card.

The things holding back Monese for me, at the moment, are lack of FSCS protection and (related) the cards being prepaid rather than true debit cards since they aren’t a real bank. This always makes me slightly nervous about acceptance, as you do get the odd decline with prepaid cards at some merchants. I’m sure this is more of an imagined issue than a real one, but I’m still conscious of it.

Funnily enough, when I went to Poland last year Monzo would not work at public transport self service machines but Monese did! So I’m glad I bought it along

I did like the Monese app, perhaps I’ll open it back up at some point but I think I’d need a new feature to entice me over.

What’s the advantage of the Monese Euro account? It seems to have a GB IBAN, and I presume a GB country specific PAN on the card, which surely means it’s still susceptible to DCC?

Actually, it shouldn’t be susceptible to DCC any more as Mastercard have banned DCC on prepaid cards.

It should therefore always function as a straight euro card, but I haven’t tested it enough to know if it always does.

Theoretically, though, this is a major benefit of Monese (thanks to them being a prepaid card),

I’m not sure it does prevent DCC (as I don’t think it meets the narrow definition, and is still likely to be triggered anyway), but as that’s a wider topic, let me start another topic to discuss that precise point. Staying on topic, I’d be interested to hear if others have experience of not having DCC on the Monese EUR card.

You raised the point earlier about the BIN of the card and it’s encoded “origin country” being the U.K. - I think that’s potentially likely to cause some issues if you rely on it totally in the Eurozone.

DCC, though, shouldn’t be one of them (although as you say, I’m sure some merchants must try to override it or otherwise sneak in a way to do it anyway). The big thing about this change is that you can easily do a chargeback and allege that they DCC’d your prepaid card, which Mastercard would side with you on every time since it’s against the rules.

That’s a welcome change, and should go some way to putting off merchants who might otherwise try it on!

Thanks. Out of interest, are the GBP and EUR cards different to allow you to easily tell them apart?

I have the old GBP card design, so can’t do a comparison.

But here’s the EUR card in the newer design: 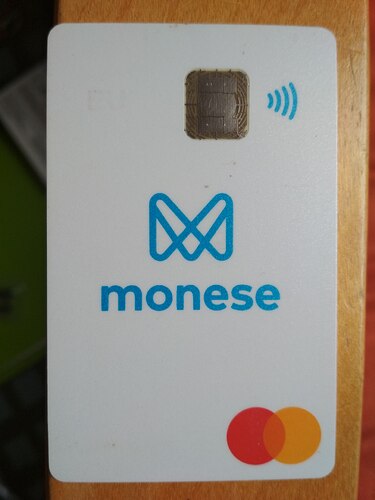 I have to look hard to spot the “EU”

Thanks - even knowing what to look for that isn’t easy to spot.

Now not available to UK residents, it seems

Yep. KBC is withdrawing from operations in Ireland.

To be clear, I opened my account with my U.K. details whilst we were still members of the EU and so far I’ve been allowed to keep it.

KBC is now looking to withdraw form the Irish market, and has provisionally agreed to sell it’s “performing” customer base to Bank of Ireland. This means my account may become a Bank of Ireland account, but I’ve yet to find out if I’ll be allowed to keep it.

I tried to open an account when we were still EU members, but their demands were so onerous and bizarre, I gave up. One of them, IIRC, was some kind of police check !

Hmm, that wasn’t my experience!

I didn’t hear anything at first, so emailed them back to ask. They asked me to call to verify my phone number - by chance, I was in the EU about a week later so I took advantage of free roaming to call them back on their Irish number.

The guy I spoke to was competent and efficient, and looked through everything for me to check if there was a problem. He said it must have been held up by mistake as everything checked out, so he opened the account there and then. I was only on the phone for 10 minutes and everything came in the post a couple of weeks later.

Well, I’ve just had an email from Monese regarding their updated terms and conditions.
They’re introducing a new paid tier called “Essential” and basically watering down the features of the free offering.
And guess what, yes the fees are increasing.

I think it may be time to call it a day with them, which is unfortunate as I have tried to support them from their early days. 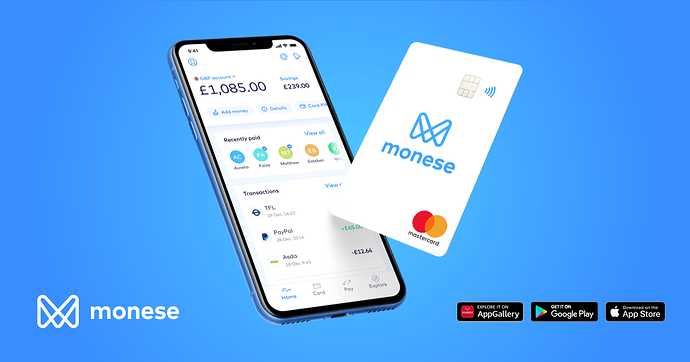 Monese's flexible pricing means you can choose a plan that suits you. We’ll never tie you into anything so you’re free to upgrade or downgrade whenever you need.