So, Monzo’s nickel and diming of the less fortunate has officially reached a new low:

They are now referring their customers to payday lenders for kickbacks 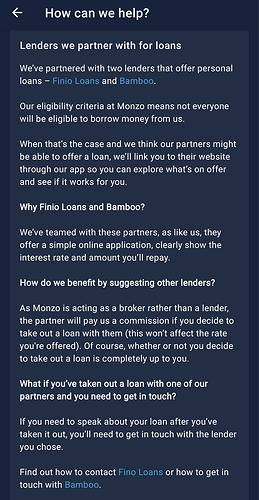 Lenders we partner with

That does give a bit of a bad vibe.

I read through the post and saw a mention of referring people to citizens’ advice bureau, which would make more sense and be more ethical.

It’s a balance of what’s right vs making money.

I’ve not personally come across either of those lenders before, but aren’t payday loans more tightly regulated now, following the situation with the likes of Wonga a few years back?

Glad I ended my banking relationship with them. Absolutely penny picking with a clown front. I got triggered by the constant flex animations. Lending begging with loans on my transaction feed.

Poor - I know from my line of work that these places lend to those under financial duress. More evidence that Monzo are attracting customers from a poor credit demographic.

Finio loans are up to 84% APR. That’s outrageous!

For a high value loan it’s rather a lot - but those excluded from mainstream provision don’t have a lot of good options.

Commission from their own customers getting ripped off by another lender. Definitely making money work for everyone. No wonder they got rid of that slogan lol

Which Monzo could do more. They could help their customers build credit worthiness and be transparent to then increase their eligibility.

However I don’t want to derail the thread by slagging Monzo off as I already dislike the bank so I will step away and let everyone else discuss amongst themselves.

So, Monzo’s nickel and diming of the less fortunate has officially reached a new low:

I don’t agree with referring to very high interest lenders but, out of interest, what other nickel and diming of the less fortunate have they been doing?

Well it all got a bit heated over there and the thread unsurprisingly, got shut down.

I don’t think it got too heated. Someone barged in and started responding to logical arguments with ad hominem attacks thus ruining everything for everyone

It was a shame really, there was some reasonable discourse and then it went a bit…weird.

Anyway - the whole thing was just weird, like a poorly veiled attempt at making money out of folk in a likely desperate situation.

It was enough for me to decide that moving away to FD was the right decision.

Was genuinely bamboozled by the poster in questions antics

It was enough for me to decide that moving away to FD was the right decision.

Why not move to RBS? You might’ve gotten a famed Drummonds card!

I considered it, I really did. But for two reasons I didn’t.

I already have a NatWest account and the savings rates just weren’t there. Barclays covers the latter, but the simple FD design won me over.

That drummonds card though….

The first direct UI is great. The customer service is also great.

When they release transaction notifications they will be on top.

I think that’s a bold statement, but one I broadly agree with so far.