Just received a new card reader from Nationwide and it’s now black, rather than the blue on the older one.

Noticed on the back that it’s made from recycled plastic, nice to see, therefore i’m guessing it’s part of the same drive towards using all recycled materials (like in their cards).

Actually feels a better build quality and sturdier than the old ones! 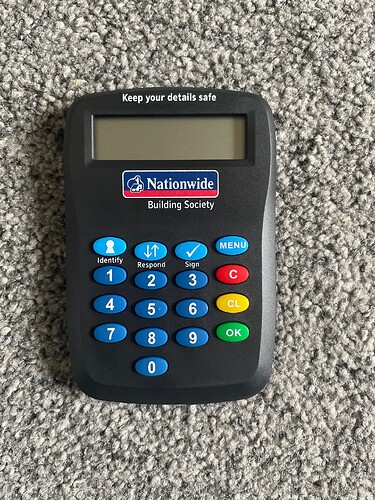 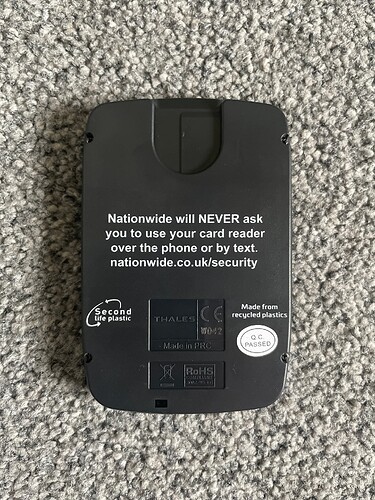 I like the added security messages. It’s a shame that they are needed, but it’s good to remind users as many times as possible. I do dislike this design though. It’s way too asymmetrical, and these card readers tend to feel quite flimsy

If I absolutely had to pick a card reader, I’d go with the Barclays PINsentry: 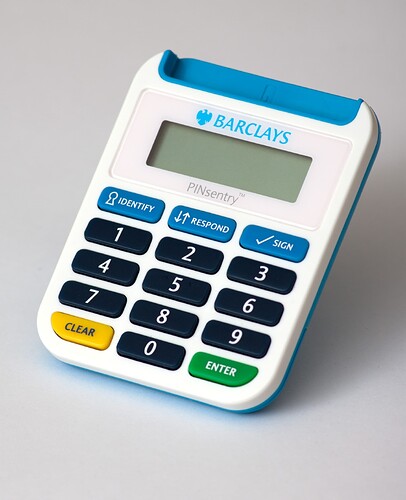 Not sure why they use a different manufacturer, and why others don’t follow Barclays

Grrrrr! Nationwide you had a chance to fix this.

Barclays is smartly designed. You can see the last 4 digits of the card being used with Barclays but not Nationwide.

Nationwide you had a chance to fix this.

I think I’d rather they fixed it for customers to not need one.

They surely must have a plan to scrap them. NatWest group are rolling out the biometric thing, Barclays have the mobile PINSentry and HSBC have the digital secure key. Nationwide seem to be stuck in a pre-mobile era.

The odd thing is, in some ways, they are quite up with technology.

They have an Apple Watch app, for example.

I think it must be a different manufacturer.

The RBS, NatWest and Ulster Bank ones are identical in design to Nationwide’s (and, back when they used them, so were Co-operative Bank and Smile).

Lloyds Banking Group don’t use card readers for personal customers, but they do on their business accounts and they are identical in design to the Barclays PINSentry.

Whenever I do have to use a card reader myself, though, I reach for the PINSentry - so I agree with you that it’s the best. I’m not lacking in dexterity, but I’ve always found the larger buttons easier and less fiddly, plus the cheaper card readers seem to scratch up your card much more which is annoying.

Oh it’s absolutely a different manufacturer, I just wonder why. And why don’t others use the same manufacturer