So on Premium Bonds, have any of you got any longer term experience?

My luck is genuinely considered good I recall but I have made £50 this month to reinvest, on a bond holding of £15000.

Doesn’t this mean I’ve already made interest of roughly 0.33% for the year? Off the top of my head, I think that’s right?

One or two more wins even of the lowest prize and I’ve beaten out the interest rates of anywhere else. I’m not missing anything am I?

With Premium Bonds, you should expect to win around £100 a year if you hold £15,000 worth. Obviously, there will be years when you win more or less than that.

One or two more wins even of the lowest prize and I’ve beaten out the interest rates of anywhere else. I’m not missing anything am I?

My luck is genuinely considered good I recall

Not sure what you mean by this - your luck is no better or worse than anybody else’s from this point onwards.

@Recchan let me tell you about this thing called investing…

I do invest, most of my worth is held in invested assets, be it crypto currencies, (premium) bonds or stocks.

I still keep some cash around.

I won a grand total of £0 this year. Yes, I’m not generally lucky, but then I don’t hold too much either

Last year I realised a return of 0.97% on my Premium Bonds holding.

In contrast, in five months this tax year, my S&S ISA is currently showing a near 8% return, on a third of the value of my PBs.

This is my first year of investing, rather than saving. Perhaps if I had done it earlier, I may have had better returns over my lifetime. Very risk averse though, me

Only £25 for me (first win this month!) since I started investing at the back end of last year.

In contrast, in five months this tax year, my S&S ISA is currently showing a near 8% return, on a third of the value of my PBs.

What’s your total holding? I would have been bummed holding since last year to only win now

The spent column is my total investment.

So I had 7k in December, when I was first eligible for the draw, going up to £10k eligible in May.

I’m going to give it a while longer and see how it goes. Might withdraw and invest elsewhere if I don’t get a couple more wins.

Luckier than me! I have had sweet naff all on a similar holding

Not wishing to gloat but… 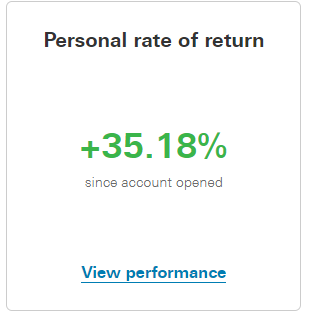 ESG funds, so no oil or vice stocks.

Over what period? I think most people chuck their emergency fund into PBs, something you definitely shouldn’t invest

You can’t compare an investment account with a minimal-risk account (such as premium bonds or cash savings).
They (should) have completely different roles in wealth management.

Risk is all relative. I’m probably the biggest risk to my savings, but after that it’s inflation so I keep the bare minimum in cash or equivalents. If I need more than that I can sell some shares in a few days, but I’m reluctant to do that unless I’m desperate.

It should also be noted that you can keep cash, or invest in bonds funds in an investment account, it’s not all lairy, seat-of-the-pants stuff.

Risk is all relative.

Not really. Clearly investments carry a higher risk than savings. I’ve dabbled in investing before so it’s not all new to me, but decided that ultimately my emergency fund is safer in PBs than invested. What if there’s a market crash and you also lose your job?

However, during the Depression, stocks dropped but eventually recovered. In 2008 they did the same…and again at the beginning of the pandemic. Don’t get me wrong, I have cash on the side for when fund shares go on sale, but I keep my outgoings low and even if they dropped 75% I’d be ok with the cash I have.

Whilst cash yields basically nothing, but inflation is still relatively high, cash is far from risk-free.

Those stocks drop in value though which is the risk. High risk investments are risky because in a downturn their value might have significantly dropped or the companies could have gone bust leaving you with nothing at all. where as while spending power may have gone down, your low risk premium bonds (in this instance) would not have disappeared.

Having your emergency funds in high risk ESG funds is a potential disaster waiting to happen, especially with no cash reserve.