Tesco seemed to have launched a new in store banking facility this week. I believe they have launched in Tesco Kensington & Tesco Baldock (source:Linkedin). 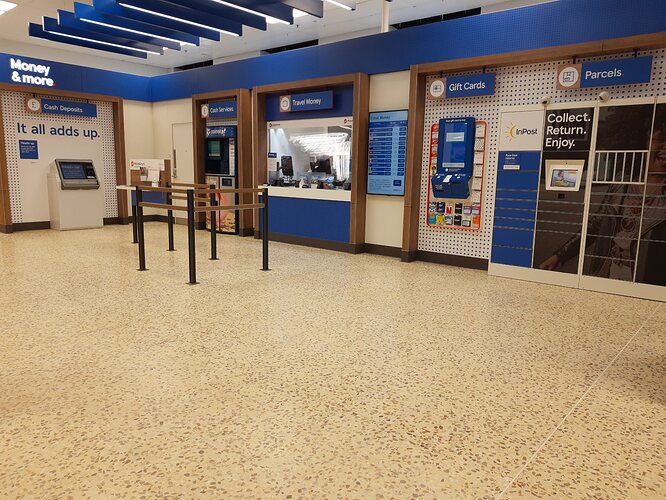 Tesco Baldock4000×3000 2.21 MB
From the right to left in Baldock there is:
Information Touch Screen (out of shot, and I did not look at it to see what information is available)
InPost Parcel collection / dropoff location
Gift Card Kiosk
Travel Money Exchange Rate screen
Travel Money facility (was originally elsewhere in the store, and I have obscured the staff member working there)
Coinstar cash conversion machine
Cash Deposit (into your bank account)

Given Baldock has lost both bank branches in the last few years, and is now limited to a Post Office, this is interesting for Tesco to offer a facility for paying cash into a bank account (although it’s not yet clear whether it’s cash and cheque, and whether or not there are any service fees).

From Linkedin, it looks like Tesco Kensington has a very similar setup (shown here)

Is that paying-in to external bank accounts, or Tesco Bank savings accounts?

Not sure until they activate it, but it says “your bank” rather than just “Tesco Bank”

Why oh why don’t they accept their own gift cards for online orders?

Having popped into Baldock today; after many months of no change to the machine, the cash deposit machine has now been removed, and replaced by a standard ATM cash machine, with the “Cash Deposits” sign also removed.

One presumes Tesco knew there was no common interface for processing deposits (like LINK is for withdrawals and balance enquiries) before installing a machine… perhaps they expected more banks to be keen to work with them - but without a much wider install base it’s hard to see any bank investing in integrating their system.

I wonder if this was something planned back when the plan was still to revive their Current Account rather than bin it off in favour of the much more limited prepaid account they’re going with now?

Be interesting to know the actual story here. Not uncharacteristic of Tesco Bank for the left hand not to to fully know what the right hand is doing.

It looks exactly like a OneBanks Kiosk, so perhaps the original plan was a tie-up with OneBanks to support a white-label solution in partnership with Tesco Bank (and this one store was to be a trial of it). Either that, or the same concept done independently using Tesco Bank’s own technology.

OneBanks use Open Banking to power their kiosks, and I imagine this might have worked similarly. Tesco Bank also do use Open Banking payment initiation for topping-up their Clubcard Pay+ card.

Interesting, I didn’t know about OneBanks (and it appears their site is currently down). Surely for Open Banking to work one would have to have some sort of account with whoever ran the terminal in order to grant access to your bank account?

Seems a lot of faff compared to just taking your debit card to a Post Office.

Yes, OneBanks worked through registering on their app initially, which I think just required enough personal information to check your identity.

Then you could go to the kiosk, login somehow based on the app (I think it was based on QR code) and processing of payments in and out of your account worked via Open Banking.

Seems a lot of faff compared to just taking your debit card to a Post Office.

Yes, although in theory it’s more viable as it can be an “unmanned” service.

Is there anything preventing the Post Office offering being automated?

OneBanks was really designed more as something that could be put in the corner of a convenience store in very rural locations (like rural Scotland) which don’t have a Post Office. This would allow for continued access to cash in a small community.

They’ve already modified generic NCR Fastlane checkouts to work with that system for postal services… doesn’t seem a huge leap to imagine an integration with a deposit or a multifunction ATM.

The blocker IMO would be the agreements they have in place and whether or not they stipulate having a human counting the cash, checking the cheques and pressing the buttons.

Yes, oddly in this case, there is little incentive for automation for either the Post Office or the banks.

The Post Office’s whole model is around “remuneration for Postmasters”, who get paid a small amount every time they complete a transaction/task, so their focus is on allowing Postmasters to complete as many transactions as possible so they get paid more. So it’s not in their interest to allow customers to do those things themselves instead.

You might think the banks would rather pay less for a more automated service, but generally they are fairly happy with the current cost and the price premium on manual services, since it allows them to continue to close branches whilst claiming that the Post Office provides a “face to face service” for those that require it. If the Post Office service became more automated, banks would face increased attention over branch closures and it is likely that regulators and politicians would look to block them. So paying the Post Office is the most palatable alternative, and allows them to continue with branch closures virtually scot-free, which still allows them to save on significant costs even factoring in the payments to the Post Office. They are also secretly aware that banking in the Post Office is hardly ideal, so they probably hope that this drives more customers online and they don’t actually have to end up paying that much for the service (since a large chunk of the cost is based on a per-use model).

Therefore, the status quo broadly benefits everybody so is unlikely to change.