I recently updated Google Pay, and realised something had gone wrong when I instantly got a message from Santander saying that Google Pay had been removed as a payment option. I opened Google Pay up and the App had deleted every single card.

So I unearthed my cards, and started to add them one by one. It flat out rejected the Santander card, but I continued to (and was successful) in loading about 5 cards. But then I tried to load one (Tymit) and I received an error message (or-tapsh-08) that appeared every time I tried to add another card.

A brief Google (!) revealed that this was an error that Google needed to clear at their end, and no amount of deleting/reinstalling from me would help

Because you can’t. Every time you go through their interminable “support” system, which attempts to get you to read a wide variety of completely unconnected articles, you come to a screen that asks you to input your query, then submit it - it gives you 2 options (chat or email), and for both of them states “Something went wrong, please try again”. It’s been like that for a week 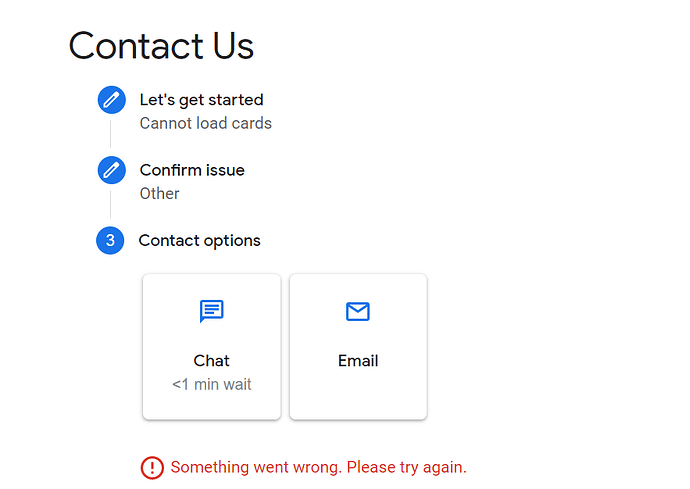 a) has anyone else had this error?
b) anyone any ideas how else to contact Google Pay?

Probably worth trying on a desktop or another device , because they’ll almost certainly make you restart your phone which would end the chat.

anyone any ideas how else to contact Google Pay?

A couple of months ago I needed to contact them because of an issue adding my Vivid money Visa card to my Wear OS smartwatch. I guess I contacted them by pressing the email button, but can’t remember. I received a reply from [email protected], you may try to send them an email on this address directly.

Nor have Barclaycard - but that latter didn’t permanently block me adding any other cards.

I’ve just submitted the query and got an acknowledgement saying they have limited staff.

I’m not holding my breath, I have to say

Indeed they are not. And they are a pretty toxic place to work as well (but that’s for a different thread)

If you have a Google One account, try going through their support. They reckon chat response is 2-3 mins. They might not be able to help you directly, but maybe they can transfer you to the right department?

No, I do not have a Google One account - no wish to pay for something I don’t need and I’m dubious about subscribing to something just to get better customer service. But thanks for your suggestion

Once had a refund to an old Google pay token no longer in use. They offered absolutely no help in working out which banking provider it related to.

What about Google for Business?

What about it indeed? Sadly, I don’t run a business! Eventually, they wrote to me say “Your issue has been resolved” and indeed, yes I can add (some) cards, except, rather annoying, my Santander Card (this was way before their IT meltdown). They refuse to take it any further and ask me to contact the bank.

Best get ya self an iPhone then

I have one. A maximum of 8 payees and some of them don’t accept either.

Do you have 8 cards on there already? I have 3 credit cards and a Suica

I have a newer iPhone* with a 12 card limit, and I’ve already reached that (with plenty of cards not in there)!

But I probably do have a case of banking collectomania, or whatever we are calling it.

Luckily I have Curve for the more rarely-used cards which aren’t saved to my phone or laptop in their own right.

I have an old iPhone SE, but I had assumed the 8 card limit was an Apple Pay imposition, to get you to upgrade rather than a physical limit for the phone.