Seems that American Express are refreshing their card designs, ordered a replacement because mine was a tad damaged and I’m moving soon, but keeping my address the same w/ banks etc. got a new design through the post and it’s non-embossed

Complete redesign or just no embossing? Mine is getting pretty tattered (it’s the see through one). I heard as well that their planned a metal gold card at some point in the UK

Complete redesign, I have the BA AmEx (standard). I don’t know why though, since it seemingly offers not much of a benefit to me, I probably should have went for a cashback card or maybe a Gold/Platinum.

I’ll probably get the paid version of the BA AmEx when I’m not /single/ or something, then it’ll actually make sense lmao

Oh yeah, the BA redesign happened last week, it’s an anniversary thing. I don’t think we’ll see any other refreshes just yet – the metal Gold has been coming for at least three years now, even Sweden got it before us!

I’d actually upgrade to it from the transparent one though, so better hurry up Amex

I have the BA AmEx (standard). I don’t know why though

Out of curiosity, how have you faired with collecting Avios?
I’ve had mine for almost a year now and I planned on giving it 2 years to see if I could accrue enough points for a couple of business class European flights, which I think I’m about on track for.

I’ve just received my new BA Amex card this morning. I agree, it’s much better designed than the last monstrosity. I also ordered a new one before expiry as the old one was more than tatty. As already stated, gone are the embossed numbers. It doesn’t expire for 5 years, so I’ll have to look after it. 100,000 Avios in the bank!

Big fan of the flat Platinum and BA cards. Too bad they’re either rubbish (BA free) or come with a ~£500 annual fee though.

Hopefully the Nectar one gets a refresh soon, the logo on there is now several years out of date.

Today I received a replacement for my card which has also received a bit of a facelift. It still has embossed numbers in gold (previously they were black). The Amex logo, detailing around the edge and artwork is more akin to the US version of their metal card. This remains a plastic card. 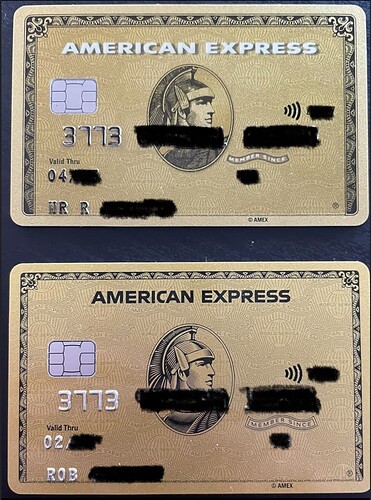 I have to admit, I do like the colour of my BA Amex over your clearly obviously lovely gold card

I think though, I actually like the green Amex card even better!

There’s not a lot going for it other than the nice card tho, rewards wise it’s the same as the (also very cool) American Express Rewards Credit Card and there is no sign up bonus. The only use it has is the ability to upgrade to Platinum…

(And to me those numbers look like they were always meant to be silver, they just rubbed off the old card)

What an absolute shame there’s a £60 annual fee

I know, it’s a pretty rubbish product really - the lack of a sign up bonus suggests it’s not a product they push, I wonder if there is just a massive cardmember base who’ve had their card since the 80s or something?

Possibly. I suspect that it may well be a card still favoured by a much advanced in years clientel

I would have one though if it weren’t for the dumb annual charge.

I don’t use my BA Amex as often as I should. I make the occasional purchase online, or as I did when I went to Florida last, used it to pay for my car rental.

The Amex charge card now has the same design as the one over the pond. It’s growing on me, but I still do like the iconic version. Curiously, while the card design has been updated in the Amex app it is still showing the original artwork in Apple Wallet. 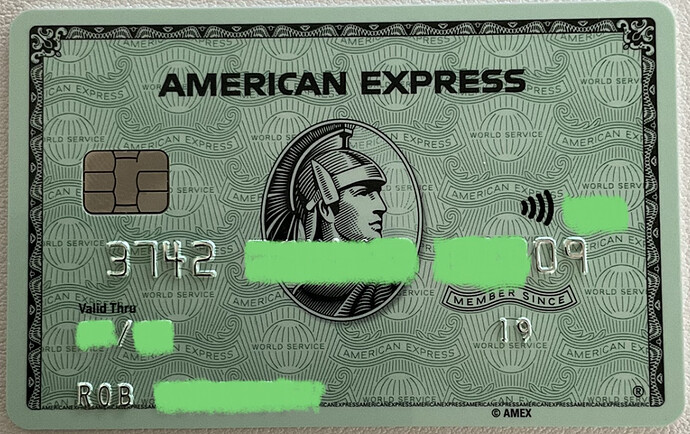 Well, that’s me not getting a Green card then. I’m too late to the party

Ah that’s a shame, the lighter version was much better.

If you have a Platinum Charge card you can also request a supplementary card is issued as Green (or Gold).