Immediately went to check the app and lo and behold:

Looking on Twitter it seems this is a widespread issue: 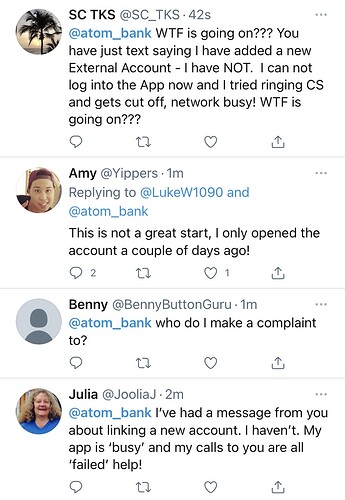 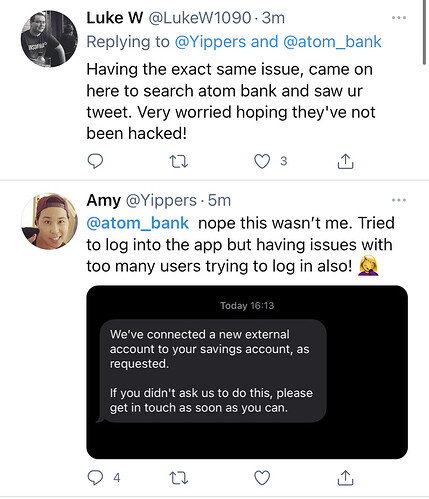 Now on hold trying to get through to someone by phone, but all lines are busy. I assume they’ve had a flood of calls.

Could it be an IT meltdown? Or perhaps even a cyberattack? Has anyone else on here who has an Atom account had the same issue?

Exactly that an hour or so ago.

Did you manage to get through to support? I assume it’s completely overloaded at the moment.

Not tried yet, but looks like it’s a case of keeping an eye out.

If I had to hypothesise about what’s going on, I’d guess something’s caused all SMS alerts to mistakenly fire at once and that’s caused a huge spike in log ins to the app, causing that to stop working too. And now everyone’s resorting to telephone support, their call centre is completely overwhelmed too.

There’s a notice to say IT issues and they’re working on it.

They’re working on new in app tools that will let you edit things you currently can’t and have to phone for. I believe your linked current account is one of these aspects. Along with your personal details.

I suspect they’ve screwed up with some backend changes they’re making to get ready for these things.

Terrifying scenario here though, and they’re going to have a lot to answer for afterwards.

Let’s see if their technical breakdowns of situations like this are as good as the ones Monzo used to do.

I didn’t receive any SMS from them though.

Appreciate the explanation - what a cock up! Even a quick reassuring Tweet would be courteous, there are no doubt some people having a major panic attack right now thinking their life savings are gone. @atom_bank
@Yippers Hey guys. These messages have been sent out in error, we're currently looking into this and looking at resolving this as fast as we can! EK
2 Likes
Lonford 21 May 2021 15:35 #10

Once Marcus’ app drops in the coming week or so, I think I’ll be moving my cash fully over to them. This is a real mess, and erodes my trust in them as a savings bank.

I don’t blame you! That’s quite the scare! They should have safeguards in place to prevent glitches like this from ever occurring.

Ah, good spot. Still no actual prominent Tweet though on their main page, just that single reply to one user.

Also had the texts and assumed that I wasn’t the only one when I couldn’t log into the app nor call their number.

Not the best first impression for you then!

I’ve seen quite a lot of people panicking on Twitter saying that they’ve only just opened their accounts, some off the back of Martin Lewis’ advice

They should at the very least put out a Tweet (not a reply), stick a big banner at the top of their homepage and update their hold track to include a brief explanation reassuring people that their money hasn’t just been nicked. Really poor immediate response for a bank that’s supposed to be dedicated to savings (and mortgages). I’d expect them to be really good at the very few things they offer. I put up with the crap app for the extra 0.1% interest over Marcus and slightly faster withdrawals, but this is rubbish.

They should at the very least put out a Tweet (not a reply), stick a big banner at the top of their homepage and update their hold track to include a brief explanation reassuring people that their money hasn’t just been nicked.

Absolutely this. They’ve clearly been caught sideways and have no protocol for managing the comms.

Not the best first impression for you then!

Well, no, but I’ve worked in IT long enough to know that these things happen. Their reputation has been pretty good up until now so I’m not too concerned.

You’d think a bank under Mark Mullen would be much better poised at dealing with these things too. Especially in terms of communicating clearly with the customers and easing any worry quickly and effectively.

The stuff he made First Direct famous for.

So many missteps here.

The true test of a company is how they handle when things go wrong. Atom are usually excellent with isolated incidents, but this has been a real test, and they’ve dropped the ball spectacularly here. I’m disappointed.

Ok, I’ve just spoken to someone at Atom Bank and here’s what’s happened.

All customers who either:

…within the past ‘couple of weeks’ mistakenly received these SMS alerts. (I added a new linked account a couple of days ago, so that’d explain why I received them, and that’d also explain why loads of people worried on Twitter are saying that they’ve only just joined etc etc)

The erroneous SMS alerts understandably caused a massive surge in traffic to the app, and as such it has stopped functioning. The engineers are ‘investigating.’ Since no one can get in touch through in-app chat, their call centre is being flooded and the poor guy I spoke to sounded exhausted (which was evident since he was calling me Matthew - which is not my name and not the name I told him - during our call lol).

Atom are currently working on getting a more detailed message pushed out to the error screen of the app to reassure people that it’s just an IT blunder.

Thanks @Lonford - that’s good of you.