I’m looking forward to having a look at this; so far from what little is out there it sounds like a very interesting bank and definitely a one to watch.

Be nice to see a new player on the block. Monzo and Starling have it all to themselves right now.

I’m really keen to see what they’ll bring that’s different. Frankly, I can’t think of a feature that’s not out there.

……unless they cherry-pick from both of the above.

. Now THAT would be nice…

Frankly, I can’t think of a feature that’s not out there.

One thing I’ve learned with the Simple closure is just how unique an offering it was, not just for the global market, but within the US where they competed too. There’s a lot of love for what they offered, yet no one else, anywhere in the world, offers anything similar enough to be an effective replacement.

In the UK, we’ve never been able to experience any of it. So in that regard, there’s certainly something new they could bring to the table for us, if they draw inspiration from what worked elsewhere but is missing here.

I’m excited to see what we get, but this is a big US bank. I wouldn’t be too surprised if we wind up with something very legacy, just with a fresh coat of paint and a slick app on top. But then, would that be such a bad thing?

My appetite is whetted…

I am excited to see what chase have to offer for us here in the uk.

They have a development team in the U.K. (one of my friends is part of it) so I’m confident Chase will be tailored for our market.

If they can match Monzo on transaction categorisation / notifications / UX then I’ll definitely consider switching to them.

Hopefully their fraud flagging system will be more mature than that of Monzo / Starling / Revolut - all of which have blocked innocent customers for lengthy periods of time and with little explanation or recourse.

Hopefully their offering is good which will spur others to make improvements in order to compete, similar to how Monzo and Starling spurred the traditional banks in to improving their apps.

I don’t think I’ll be signing up, however. JP Morgan have too much baggage that I personally do not like so I will avoid doing business with them.

If you look at the various Google Play Store reviews about any or all of these, that’s a major feature that upsets users of neobanks.

And whilst I recognise that those who have their accounts suspended are only a small number of customers, it is utterly appalling that companies can keep people’s money locked up for MONTHS whilst they “investigate” them (and I use the phrase “investigate” because I think precious little investigation goes on, as these roles are not generating revenue, nor, does it appear, that they have any statutory deadlines to meet for resolution. Perhaps if they did, they might resource this area of work properly).

This happened to a friend of mine, whose “crime” was to send £10,000 to a neobank account, which was immediately frozen, they didn’t contact him for over a month, when they did, they repeatedly asked him for his bank statement, and then released the funds without letting him know. Someone in their CS function let slip that the “Compliance” team had been completely overwhelmed by their fraud algorithm, but no more staff were allocated as it wasn’t an area that generated any income.

Obviously if Chase has big pockets, they have the potential to resource this area well, but I wouldn’t assume they won’t go down the same road if they are operating branch free.

I wouldn’t be too surprised if we wind up with something very legacy, just with a fresh coat of paint and a slick app on top.

I get the feeling it will be much better than that; after all, the “Chase UK” (or whatever it will be called) proposition has been in development for well over a year now. I am expecting a product which is both tailored to this market and fairly advanced at launch, and I think most industry-watchers are too. I really don’t get the feeling that they will launch with a Minimum Viable Product mindset at all.

I could be wrong, but if I am then I think many people will be disappointed. 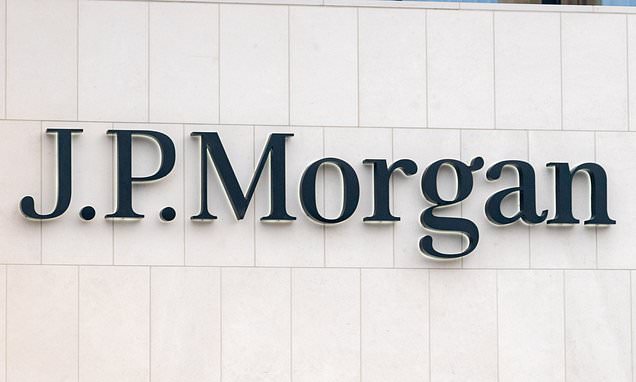 It will mark JP Morgan's first foray into retail banking in Britain and comes after its rival Goldman Sachs launched its Marcus savings account in 2018.

Chase are aiming to differ from Marcus…… it says in the article. Seems strange, as I wouldn’t have thought anyone here would have compared them anyway. Marcus is hardly a current account.

And they’re hoping customers will pay their salaries in. Well, I’m sure some will be only too keen - once they know what’s on offer.

Keen watchers won’t have missed the fact that JP Morgan hasn’t exactly bathed itself in glory with the European Super League & Jeffrey Epstein associations. I doubt, though, that’ll do them any real damage when it comes to the Chase launch.

I just hope the launch isn’t as underwhelming as N26 turned out to be…or as protracted.

I guess I’ll stop checking chase.co.uk so compulsively then… for now

I think you may be hoping this is the case. The reality may be substantially different.

Monzo and Starling have it all to themselves right now.

I think of them both in a similar way.

I suspect that Chase may be more Starling-like in approach, but that’s only a suspicion and not based off anything.

It’s just fairly obvious that Anne Boden’s banking background has been responsible for much of Starling’s approach, and I’m sure that Chase (being a large bank themselves) will have a similar approach. Unless they run the U.K. operation totally at arms-length to allow a more startup-style approach to things, which might result in a product more in the style of Monzo. I think that’s fairly unlikely, but it wouldn’t be crazy either.

What I would say is I hope they do some proper research on the market here before launch, as we wouldn’t want another N26. 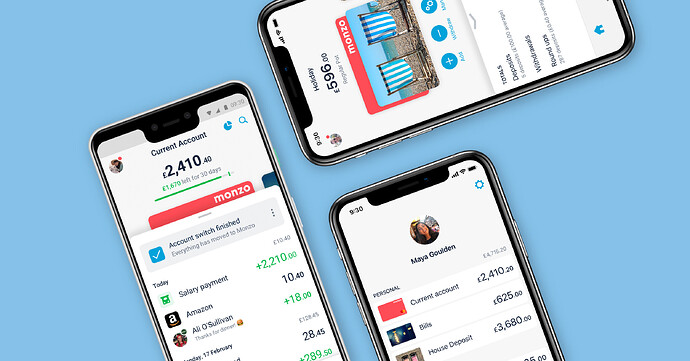 Starling give the impression that they are a bank that’s into tech, Monzo seem to be a tech company that’s into banking.

Except that, outside their current accounts, neither of them has launched an innovative financial product yet.

Could this be related to the new Chase Bank current accounts? 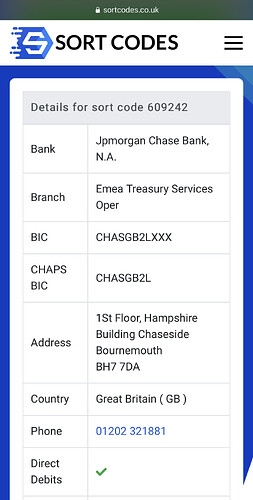 With a ‘branch’ name like EMEA treasury services I suspect that sort code is for their existing investment banking operations.

I’m a bit surprised that they seem to have a sort code in the NatWest zone, rather than the 04 “utility bank” zone.

Maybe they will issue chequebooks?