Lots of JPM/Chase branding all over the US Open, which will be good for their brand recognition.

I saw that too, but it’s clearly aimed at their domestic market and not a sign of an impending launch here (yet).

It would make to sense to launch fairly soon afterwards though, as the brand would then be recognisable to Brits even on a subliminal level.

So I decided to do some more digging on Chase UK and found the mobile app on the Google Play Store. I’m not sure if anyone else has noticed this but see the attached screenshots.

Tapping on the join the waiting list doesn’t seem to do anything.

I also just phoned the support number in the app that they give and the representative I spoke to said they should be releasing to the public within the next 2 weeks if all goes well at their end. So not long to go!

Everyone interested will be praying this doesn’t go the way of N26. I’ve a funny feeling it won’t.

But I’ve no sense of what we’re getting, though

Hmm I may have to give this a try!

I wonder what restrictions may apply….?

Nothing on the iOS App Store yet 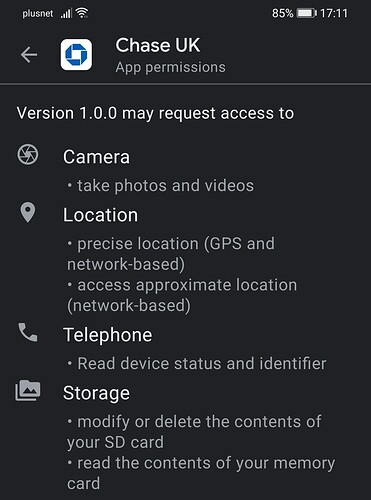 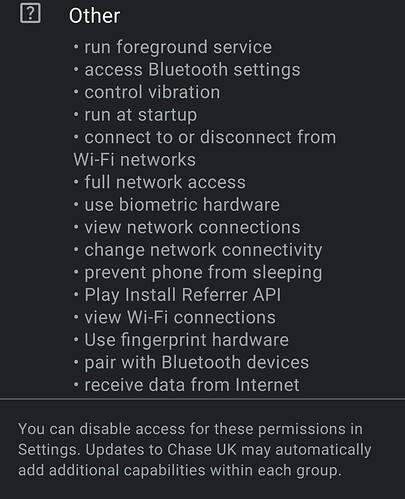 I suppose that Camera permission is needed for signup (probably involving a selfie) and location for anti-fraud features.

No idea why they would need “telephone”access though, although this may again just be the unique device identifier (again, as an anti-fraud registration thing). I’m not sure exactly what the Android permissions do mean technically speaking?

Having downloaded the app there’s nowhere I can see to join a waiting list. 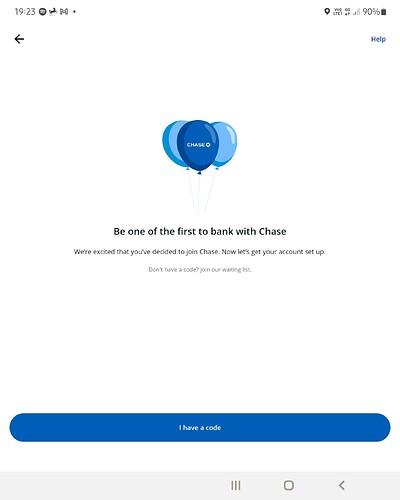 I cant find anything on the Apple Appstore

No indeed. This is from the Android app.

The tiny text in the middle of the screen @Graham?

Yep, but it doesn’t go anywhere.

I pressed help and tried calling them and it said the number is invalid. I dont know why i tried it but yeah