I was keeping a useful list of banks with cheque imaging support in their apps available and updated over on the Monzo community.

Given it’s relevance across different banks, and the hopefully useful nature of the information, I have decided to also put the list here for posterity, and as a better fit.

Banks not yet offering support:

TSB (claimed to be coming soon, posting a cheque is possible and Post Office deposit is available)

Metro Bank (deposit in-branch only, it may be possible to post to their Head Office)

Chase (no support for cash or cheques at all)

Kroo (no support for cash or cheques at all)

Revolut (no support for cash or cheques at all)

Danske Bank (deposits can be made at the Post Office)

Bank of Ireland (deposits can be made at the Post Office)

AIB (deposits can be made at the Post Office)

Monzo released an app update today that removed the freepost option for cheques. Given that cheques still show no sign of going anywhere, perhaps this indicates cheque imaging is coming?

Freepost and cheque imagining are solutions for low value cheques, so it seems plausible. Maybe I’m being too optimistic though.

Monzo released an app update today that removed the free post option for cheques. Given that cheques still show no sign of going anywhere, perhaps this indicates cheque imaging is coming?

They explained this on their community when the change first appeared in the Testflight version.

Basically, the freepost option still exists but has been demoted in visibility as it was not that reliable. It’s still in their cheque FAQs.

So to avoid cheques going missing, they recommend using the “real address” instead. Personally, I would be tempted to put the whole address with Freepost Monzo at the start, and then not put a stamp on. I wonder how that might work?

Ah! Must have missed that!

I’m curious if that would work. I was under the impression freepost Monzo went somewhere else.

I’m not sure demoting the visibility will earn them many brownie points though. As @anon8332849 says, it just comes across as nickel and diming customers. I don’t think my mum will be too happy to think she now has to buy a stamp to send cheques to Monzo.

Edit: ignore me. NatWest International is a different entity!

Must say I’m surprised to see NatWest not support them!

Exactly, it seems like a way to further restrict the ability to use cheques, coming right at a time when they have had trouble dealing with them (high profile stories on the forum of people’s cheques getting lost despite using recorded delivery). What Monzo have said is also probably true, but that won’t matter to customers. What they will see is that they now have to pay to pay in cheques, as well as already have to pay to pay in cash. They won’t care about the reasoning.

I’m sure it’s not going to go down well.

NatWest International is a different entity!

Yes, that is right.

I must say that I haven’t been able to independently verify NatWest International or Isle of Man Bank’s support myself, but I have noted them as supported based on App Store release notes.

I’d be interested to hear confirmation that they definitely are supported from customers, if there are any out there.

It’s potentially also worth noting that when I say Ulster Bank, I mean Ulster Bank NI only. Ulster Bank ROI does not offer support, perhaps understandably.

According to my sister, it literally became available in the IoM bank ios app today!

What Monzo have said is also probably true, but that won’t matter to customers.

To be honest, I’m not sure I actually buy their explanation.

Royal Mail are pretty poor in general so no doubt things are going missing - but in pure commercial terms RM won’t get paid if the Freepost letter doesn’t get delivered, whereas they have already been paid for a letter with a stamp (and how many people complain to get the cost of a stamp back?) so the commercial incentives are to ensure the Freepost ones do get delivered.

Maybe, but then Freepost is the same as standard second class post. I believe that Business Reply is equivalent to prepaid first class.

Second class post is in the system longer, so has more chance of getting lost.

There was also much discussion about this a while ago on the Monzo community including from some people involved in automated OCR technology, and they hypothesised that what could have been happening was that “Freepost Monzo” might not have been picked up as an address, as the return address on the back of the envelope would have appeared in a format more similar to what the software was expecting. This would further increase the chances of error.

PS: Also, Monzo recently changed their advice to “please take a picture of the front and back of the cheque before posting”, which I can only assume was due to them seeing a significant number or customers complaining that their cheques had gone missing.

As ever, there is likely more to it than they are saying publicity, but what they have said is probably also true - at least to an extent.

According to my sister, it literally became available in the IoM bank ios app today!

Good to hear - it was supposed to have been released last week, but your sister may have only just updated her app!

Must say I’m surprised to see NatWest not support them!

It’s shown as coming soon in the NatWest android app: 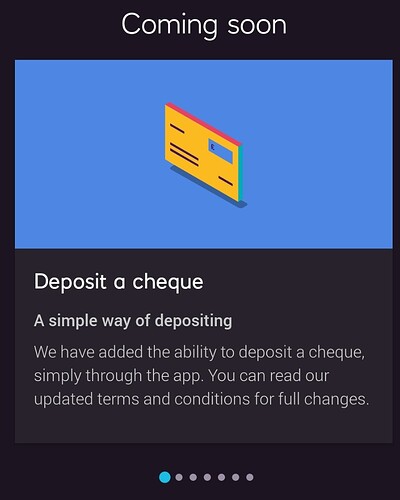 It shows the same on iOS.

Usually once features appear there they are released within a month or two.

So watch this space!

just a way of saving money by not having to pay for the cost of postage?

If it is, they must be close to folding. It can’t be more than a tiny cost for the business overall.

I was thinking that. But I’m more inclined to think that it’s just a poorly timed decision (or just a mistake). Time will tell.

I too wonder if it might have been in the works for a while, as one or two Monzo staff members did mention on the forum a while ago that they were looking into their processes around cheques as a few customers had experienced cheques going missing. I believe the person involved was invited to raise a complaint so that it would get tallied as an issue again and pushed up the priority list at Monzo.

Interestingly though, the only recent complaints i can remember reading were people who shelled out for recorded delivery, these were being signed for by “Security” at Monzo and then vanishing. Given that they’d be sent to the bank, to the address the bank now want you to pay to send to, it does makes the demotion of Freepost seem a cost cutting measure more than to improve reliability.