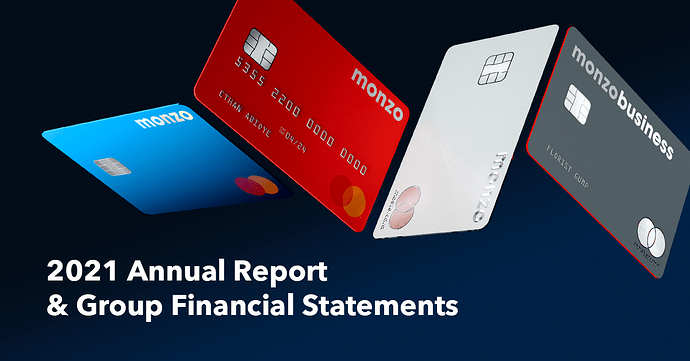 Our annual report for the 2021 financial year, for investors, our community and customers.

Haven’t had chance to read the report yet, but the statistics presented on the micro site look impressive at a glance!

Here’s a link to the full report for those who want to assimilate and break it down!

Monzo under investigation by FCA over anti-money laundering rules

£130 million in losses and this doesn’t do their reputation much good I have to say.

it’s not looking great to be fair… just someone I watch on YouTube, seems somewhat on the ball. In May 2021, the FCA notified us that it had started an investigation into our compliance with the Money Laundering Regulations 2017, potential breaches of some of the FCA Principles for Businesses and related FCA rules for anti-money laundering and financial crime systems and controls between 1 October 2018 to 30 April 2021

Was it back in May when there was a tsunami of reports on the Monzo forum and elsewhere that people’s accounts had suddenly been frozen for no apparent reason? If so, that would line up perfectly with the FCA informing them that they were being investigated for AML non-compliance, and would explain the sudden increase in the sensitivity of their algorithms…

Haven’t had chance to read the report yet, but the statistics presented on the micro site look impressive at a glance!

Something especially of interest:

…there is a risk we won’t be able to execute our business plan, which could impact our ability to generate a profit or raise enough capital to meet future regulatory capital requirements.

Because of these obstacles, the Directors recognise there continue to be material uncertainties which may challenge our ability to continue as a going concern.

The auditors are a bit more specific:

As Sasha points out in the YouTube video linked by @anon8332849, the auditors’ report from last year raised very similar warnings of ‘a material uncertainty…that may cast significant doubt on the Group’s ability to continue as a going concern,’ but the specific mention of a 12 month timeframe is new.

Edited to remove some dramatic wording - I don’t think I was being particularly measured when I wrote this at 1am!

I don’t think I’ve ever waded in much on the topic of a going concern, but personally I’m not too concerned, and I’m sure investors won’t be too.
I have some post graduate study in accounting, though I’m by no means a qualified accountant.

Maybe my lens is a little too optimistic, but the doubts seem conditional on Monzo’s inability to raise new capital. I don’t for a second believe Monzo will be unable to do that.

Instead this reads more like a typical risk assessment to me. The risk is outline clearly, and they know what they need to avoid it: capital.

I’ve compared Monzo to Ocado in the past, and I still believe the position their in is one that is identical to Ocado’s. Monzo is every bit a bank as Ocado is a grocery store. That’s how I view them at least. I remember when the same doubt was cast on Ocado’s ability to continue as a going concern, and yet here we are 15 years later.

It sounds scary, but I think to say they’re in serious trouble, in all caps, is not much more than your typical YouTube hyperbole. Hyperbole creates drama, drama creates impressions, impressions lead to more clicks, and clicks leads to revenue. Algorithm gaming at the expense of credibility It’s why there are no good Pokémon content creators on YouTube!

In this case it’s a real shame (something that’s been discussed on the Monzo community not too long ago in the past!), because that video was otherwise a very good breakdown of the report.

Agreed, the tabloid style sensationalism isn’t a good look at all - on a related note, I despise YouTubers who pull those stupid dramatic faces in their thumbnails in an attempt to farm clicks; finance YouTubers seem to be especially bad offenders!

Regarding the going concern warning, yes it’s only going to materialise into a sh*tstorm if the flow of investment stops, and I’m sure that those who have got on board so far are experienced enough to understand that, so it’s highly unlikely that Monzo would collapse in the next year - its backers would be stupid to allow that to happen (…on the other hand, if they were to continue to be loss making for many years then it’d be time to really worry about how much longer investors would be willing to keep it afloat for). The warning is also some sensible base-covering on the auditors’ part if the worst were to end up happening.

However, Monzo are suggesting that they’re on track to be profitable by 2022, and yes while deposits have increased very respectably, losses have grown even more. They’re quick to blame the pandemic, but they’ve also laid off a considerable number of staff and closed down their US office. Starling OTOH have managed to use the pandemic to their advantage through the BBL scheme, which was a remarkably wise move and will have secured them some very valuable secure income for the years to come. Monzo’s troublingly low income per customer and the fact that only 55% of customers use their account on a weekly basis suggests to me that they’re still struggling with shaking off the ‘spending card’ image. Being seen, trusted and used as a ‘proper bank’ will be key in achieving long-term profitability IMO, and today’s news re. the FCA’s investigation and the more trigger-happy account freezing algorithm that will undoubtedly come with it certainly won’t help that. The trajectory that the numbers paint (actually in spite of some very positive stats) is what concerns me. Hopefully TS Anil will be able to replicate some of the more boring yet crucial strategy elements that Anne Boden has used to make Starling profitable (despite its slower growth in customer numbers, lower brand awareness and without nickel-and-dimeing its users through unorthodox fees/paywalling of account features).

Completely agree with everything you say here!

Someone on FintechTalk did seem confident Monzo would cease to exist by Valentine’s Day 2022.

I actually still have the reminder on my phone for that deadline!

A shame FTT never went back up, if only in a read only mode.

A shame FTT never went back up, if only in a read only mode.

Sorry for going off topic but a read only archive of FTT would’ve genuinely been brilliant. Over the time it was around for the community had contributed some really interesting and insightful information to that forum, and in the end I think it constituted a very valuable resource for people seeking help/troubleshooting or for those just looking to find out a bit more about how banking works. Sad to think that that’s all gone forever, but a strong reminder I suppose that anything on a site like this is totally reliant on the admin being able to/wanting to sacrifice the time and money required to keep the project up and running, so save offline copies of anything that you want to keep for future reference. …Not that @Mathew has any plans on closing this place down anytime soon, I hope!

But the Monzo forum, for example, I half expect to have the plug pulled on one day by senior management when it all kicks off again and they decide that it just isn’t worth the hassle and potential brand damage (not that I’d want that to happen, but I don’t see such a liability as particularly compatible with a post-start up stage bank trying to have itself taken more seriously).

Sorry for going off topic but a read only archive of FTT would’ve genuinely been brilliant.

You can see quite a few of the FTT posts via websites such as Archive.org

Not that @Mathew has any plans on closing this place down anytime soon, I hope!

No plans on that one!

But on the note of Monzo, from a business perspective, they have one thing iny their side - customers. 5m accounts is impressive for a new-ish bank, I think.

It’s less about getting new customers but more of monetising existing ones. I don’t necessarily mean new charges, but new products. Done right, Monzo plus is a good example.

Introducing other add-ons or new products to compliment the service already offered, should be enough in my opinion.

What that looks like however, is up to them. They just need to make it look good, be low cost, and not cause any bad publicity

What interests me this that I think they said 25% of their revenue came from subscriptions of the paid accounts.

This is quite precarious, all it needs is Starling or LLoyds or someone to add one of the paid for features to their product and people will drift away.

Imagine the numbers without that revenue, people would be very concerned. I can only see Monzo trying to develop even more on this road and they will have to in order for people to keep subscribing.

To me it’s not sustainable, they need to be making money in core banking activities.

This is quite precarious, all it needs is Starling or LLoyds or someone to add one of the paid for features to their product and people will drift away.

Don’t most other banks (incl Lloyds) already offer (most of) those paid for features?

I meant really adding a paid for feature to the respective free banking product. From this interview It seems the FCA expects a bank to be profitable within 5 years as that’s enough time. Also a bank startup shouldn’t be treated the same as other startups. If they fail its the tax payer that has to bail them out.

The way she speaks just shows such a nuanced understanding, really shows that she’s been a banker for decades and she’s got her finger on the pulse, she could potentially walk out of Starling a billionaire imo

Whilst our competitors weren’t answering the phone we were open 24 by 7.

Someone’s been reading the Monzo forums!

Starling aren’t exactly the speediest either. Whilst I’ve been getting up and running, response times from them both in app messaging and over email can take up to a day (slower than Monzo), though once you’re assigned an agent and they’ve replied, subsequent replies are fairly quick. Live chat would end with someone needing to contact me via message within the next few days. Very big bank feeling, only friendlier. No Monzo-esque escalating. Haven’t tested the phone.

It’s pleasant enough, but I do get the impression their support agents exist to get you to go away, rather than actually help you. 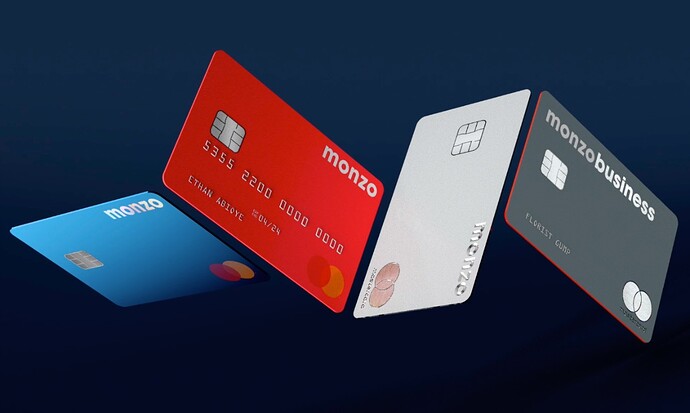 Does the Hot Coral bank have a red hot business model? Not this year.

But this is what really caught my attention, seems they currently have a £115m loss -

CEO TS Anil says Monzo will become profitable in 2022 and, for all the effort put into subscription products, savings partnerships, utility switching, lending, US expansion and more, it’s likely that net interchange fees will still be what pushes the business into the black.

Not impossible mind you!

I’d genuinely be fascinated by a breakdown of each of these functions and how they’ll contribute to said profitability.

I imagine they’re going to be launching more financial products between now and 2023 that will help steer them towards profitability. Credit is likely going to be next given the discussions and teases from employees on the Monzo community.

Branching out would be an effective way to achieve that, if they can build those things whilst keeping costs low that is.

Giving more users very compelling features to upgrade to a paid account would be another too.

If they continue the next year with their exact current approach as now, I can’t see profitability happening. So there’s got to be some new things coming that they’re banking on making more customers significantly more profitable.