Santander have extended their 2.5% Regular eSaver to all Santander current account holders now, and not just their 123 accounts.

Possibly because that rate isn’t a leader at the current time.

May interest some, hence the post, though I’ll be giving it a pass.

Don’t like that they are forcing you to fund via your santander current account. Just means you have to set up two standing orders

Seems to be no penalty for withdrawals, so could be a handy rate booster

Tried to apply in the app and the Continue button wouldn’t work, so… Not impressed. I wish these accounts were preapproved with your current account and you could just tap a button to start saving.

You also have to watch the auto renew after twelve months, regardless of the rate of the product at that time.

Hmm, yeah, not a fan of so many caveats

Isn’t this the case for all regular savers from high street banks? I assume they exist mainly to encourage people to open or keep current accounts with the bank.

You also have to watch the auto renew after twelve months, regardless of the rate of the product at that time

Unlike some other regular savers (e.g. HSBC, First Direct) there is no interest penalty for early closure. So it doesn’t really matter if you are auto renewed into a new 12 month term and then decide you want to close the account before that term ends.

So it doesn’t really matter if you are auto renewed into a new 12 month term and then decide you want to close the account before that term ends.

I’m afraid it does, when you do not realise that they have auto-renewed you and you cancelled the standing order as the current rate was undesirable.

This happened to me a few years ago.

My RS matured around the July and I stopped my SO, expecting the RS had finished. Alas not, cos when I “opened” one in the Sep of that year and funded it as normal, it “matured” the following July!! Hence I lost interest as did not save for full twelve months.

Complained to Santander about it as I did not explicitly renew or open a RS in July, but they would not budge.

It was odd though, cos they paid me the rate of the Sep product for that 10 months of saving

Didn’t push it as it was not big money. Perhaps I should have

Instead, vowed not to use their RS again. Simple really.

Isn’t this the case for all regular savers from high street banks?

It is, but I’ve never seen it enforced. Santander seem to be making this a bit more prominent so perhaps intend to push it

I suspect if you had requested closure of the auto renewed account prior to restarting payments in September you could have got a new 12 month term from September. I’m pretty sure I have closed an account in the past and then opened a new one with a new 12 month term. I wanted to shift the month that my various regular savers were maturing and I remember being able to do this with my Santander account.

If auto renewal isn’t desirable I think one way to avoid it is to setup a standing order with an end date in month 12, rather than have an ongoing standing standing order that may still be active on the date of account maturity. 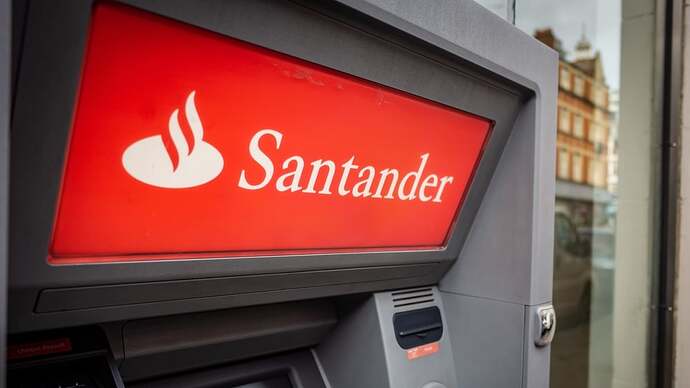 Santander has launched its new 'Edge' current account, replacing the popular 123 Lite account which is no longer available to new customers. But is the new product worth it?

Isn’t this the case for all regular savers from high street banks? I assume they exist mainly to encourage people to open or keep current accounts with the bank.

Not at all, no. Lloyds, Halifax, Nationwide, don’t specify that payments have to come from one of their own current accounts.

You still need current accounts to open them tho, at least with LBG.

Got the email this morning about this - it is the 123 account in all but name. The plug for it as herewith attached below.

No chance I will go for this. Not just because I think it’s worthless, but because when they launched the 123 account, I was bombarded with ads and calls for it, and was sent a letter saying that they “urgently needed to speak to me about my account”, which involved a 15 minute wait to speak to someone who claimed that if didn’t take out a 123 account and traded down to a Everyday Current account, then my credit rating would be affected. I made a formal complaint and they assured me “the staff member would be retrained”, but it left a nasty taste in my mouth, particularly in the light of receiving an alarmist letter expecting me to contact them (and pay for the call) to be subjected to a sales pitch.

There’s nothing here (other than the cashback - £10 per month - woo, and indeed hoo) that you don’t get with my unpaid account. 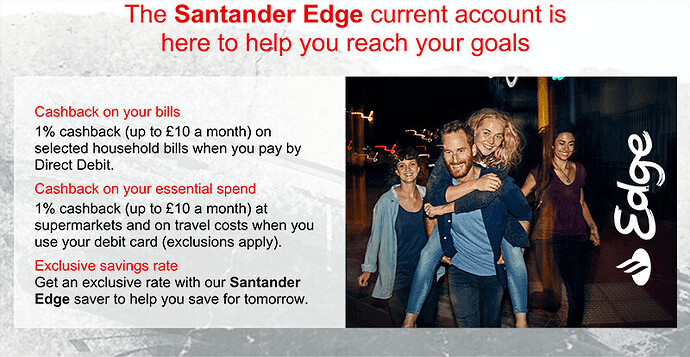 Literally nothing to tempt me away from 123 Lite in there. Higher monthly fee, less direct debit cashback (both in % and in absolute £ terms), debit card cashback that’s so limited in scope I’d earn nothing from it and savings rate beaten by Barclays, Natwest and RBS.

I do wonder when the first mainstream bank will sack off the “free” banking in an attempt to stem their losses. I can see Santander being a prime candidate

I reluctantly use Santander for the 2.75% savings account, but their customer service is awful. They once blocked my account after a transfer to Chase Bank. When phoning, they put me on hold for 2.5 hours on the phone…then hung up on me. Not good.

Their CS is abysmal, for sure. I’ve had hundreds (and I do mean hundreds) of pounds of compensation when I’ve complained to them in the past. They blocked Google Pay for instance, for months on end, and they couldn’t tell me why (that was after allocating the investigation to a staff member who had left) and then lied to me when telling me it was “still being investigated”.

I remember I applied for a credit card in a branch once - back in the day. Appointment booked for on my lunch in a city centre branch. I was sent a text telling me the appointment was moved to another branch out of town - I replied asking if I could see someone else at the same branch they replied “no”. The advisor was clearly moved to another branch for that day. I went in and the salesman sheepishly vacated the floor, they offered another appointment but I declined. Clearly the staff were on a hit target or get the chop set up. Completely unprofessional outfit.

Indeed! Long in the past thank god