I did a rare thing and contacted Starling customer support to request if they could remove all of the payments I had hidden in the payments section.

Starling were good enough to respond and tell me their tech team say these hidden payments albeit now defunct, cannot be deleted even by them.

I just wanted to bring this to other Starling customers in case like me, they didn’t want these former payments just sitting there forever. Upshot is, there’s no way to get rid of them, all you can do, is hide them.

Are these the recurring card payments in the “scheduled” tab?

Yes, that is correct, go into payments, scheduled and there’s a list there of direct debits etc.

If like me there are other payments visible which are no longer active, you can hide them, but that’s it, you can only hide them.

I just don’t want to even see the ones I’ve hidden any longer, but Starling say they can’t remove them, so I’m stuck with them. Seems a bit daft to me. I also just don’t understand why some completely ‘one off’ payments end up in scheduled payments.

I guess there’s probably a couple of challenges with allowing a ‘delete’ - one I can think of immediately would be the following scenario:

Somebody deletes a recurring transaction from this screen, but then later changes their mind. Where do they go to get it back?

I think the one off payments end up there because of the way they’re charged. I’ve got things like Audible and Crowdcube in my list - things which take my card details and charge me later.

But Crowdcube, for example, is dated 2019. Would be nice to at least hide them

Somebody deletes a recurring transaction from this screen, but then later changes their mind. Where do they go to get it back?

I absolutely get that. My situation is that a couple of former recurring payments, I shifted months ago to mine and the Wife’s Nationwide joint account so I won’t be using Starling again for those particular payments. Hence why, I just want them gone off my Starling account because there’s just no need for them to be there anymore.

Yeah that’s fair enough and is probably a common scenario why somebody would want to completely delete them.

What would be the behaviour if you could delete them but then did use your Starling account again for those payments in future? Would they display in the tab again, or stay off the tab with no way to restore them?

Looking in the Payments section on my Starling app, I cannot see any hidden payments.

I have also not pro-actively hidden anything in this section, to my knowledge.

As the thread suggest these items are hidden, how do I find them?

You need to hide something first

If like me there are other payments visible which are no longer active, you can hide them, but that’s it, you can only hide them.

How do you hide them?

I don’t have any option for this. I’m on Android is that makes a difference

I’m afraid I’m not sure if it’s the same on Android, but on iOS you go to the Payments tab, tap Scheduled, and then tap on a card payment. Then turn this toggle off: 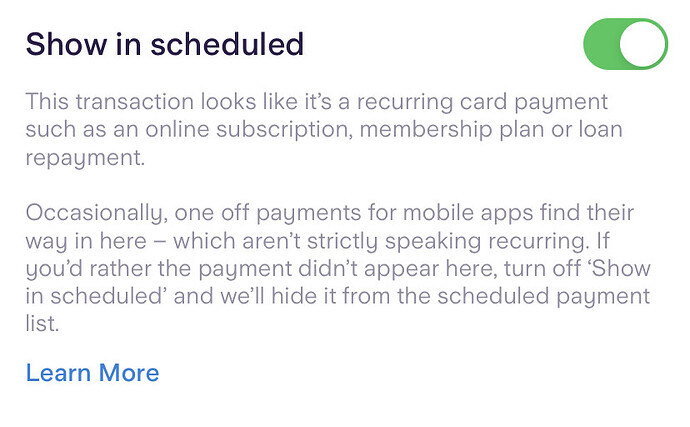 How do you hide them?

I don’t have any option for this. I’m on Android is that makes a difference

I have no idea if there are differences between the iOS and Android Apps, but if you have former direct debits or recurring payments that are no longer active, there is an option to hide them in the iOS app.

Apparently not the same on Android

I cannot find any on my android app either @Mathew so appears not.

I’m assuming you folks on the Starling Android App are on the very latest version whatever that might be?

I think payments turn up on this section because the merchant tags them as a recurring payment, even if they’re only authorised by you to be taken once, as a single transaction.

I guess all Starling has done is automated a view of these type of transactions, and it cannot delete them because they’re on the system as ‘recurring’ and it cannot change that. Hence why it allows you to hide them.

These type of transactions will all be stacked up as well within your Nationwide account. The difference is Starling shows them to you. You’re going to have to live with them.

I’ve had this “issue” for a month now on android. Scheduled payments section is now full of old recurring payments with no way to remove them.

Starling say this is how it’s supposed to be. I see plenty of people complaining about it though so surprised they haven’t sorted it unless they really think this is okay.

Yep, that’s my thoughts too. But even looking at the data in the API, I can’t see what says “it’s recurring”. Curious to see how Starling works that one out, because I’ve even got one-off payments showing there