Besides my Starling account, I still have my HSBC account which I rarely use - it’s just there, and I’ve had it 19 years so a shame to get rid of it now

I notice HSBC has a few little features like the notifications (although, not sure if these have fully rolled out now?), and balance after bills, which I can see as being handy.

But, Starling is my main bank, and besides a few small tweaks here and there, progress seems to have stalled. Maybe it’s just me, but has anyone else noticed? Anyone know if anything is in the pipeline?

I should mention though, it’s nice to see tidying and tweaking on-going, as I completely understand that’s a valid part of an app’s development. But things like balance after bills, I’d expect more from Starling (or similar) than someone like HSBC.

To quote YCombinator, “do things that don’t scale”

progress seems to have stalled.

Well given its a fully fledged bank and pretty much has a whole suite of features already. Progress was always going to slow during a global pandemic, need to remember that they’ll have been ploughing everything they could into bounce back loans etc.

I suspect things will ramp up again now that the main rush is out the way. They’ve had plenty investment and making money, they don’t need to rush into everything all at once.

I’m still hoping that they are planning on rolling out their credit card.
Not that I actually need another credit card, but as I use Starling purely as a travel account, it would just tidy things up for me personally when paying for flights, hotels, car hire, etc.

But until they do, I’ll keep working on earning enough Avios on my Amex to bag a free (or at least discounted) flight or two.

Credit Card and Direct Debits from a Space are my two main wishes.

I would also like card payments from a Space but can see this being a bit of a pain.

I like what Hyperjar are doing on this front but for my main bank (Starling as well for me) it is probably too far.

Instead maybe an option on the feed/transaction to “take payment from space” would be amazing. Once clicked, you would choose your space that you want the money to come from and the money is then transfered in. In the Space itself would be a note of the reduction and transaction.

Which follows on to my final wish- transaction feed for spaces!!

Instead maybe an option on the feed/transaction to “take payment from space” would be amazing. Once clicked, you would choose your space that you want the money to come from and the money is then transfered in. In the Space itself would be a note of the reduction and transaction.

So once you’ve done the transaction, sort of going back and saying it comes from a space rather than your main balance? That sounds like it would work, and I like that idea!

Which follows on to my final wish- transaction feed for spaces!!

They already do this for connected cards, so I’d like to think this could be an easy one to add in. But who knows!

So once you’ve done the transaction, sort of going back and saying it comes from a space rather than your main balance? That sounds like it would work, and I like that idea!

Exactly that. I know you can manually do it by going to the space etc. but this is just more automated. I would still expect to see the original transaction on the feed but either an symbol to represent money has come from the space or another feed line showing the incoming money.

I would like to see pay direct debit and card payments from spaces as well as a credit card. I like that they are slowly doing bugs and fixes but hope we see some more new innovations from them.

There are lots of little niggles. For example, future outgoing payments only show direct debits, but the early warning you’ll go into overdraft takes into account standing orders too. It would be nice to get that straightened out.

I think some things don’t get changed because there’s no good way to give feedback on the app. I messaged CS about the pay again button being taken out and got some generic robot response from someone who clearly hadn’t even read my message, let alone understood what I was asking

I tend to give feedback through the iOS App store. If you think it’s crap, tell them it’s crap. RBS seem to read and listen to feedback left there. Whether Starling have any interest in taking in customer feedback though, is another matter.

Can’t speak for iOS, but in Android there’s an option in the contact section for feedback. Well, feature suggestions and improvements 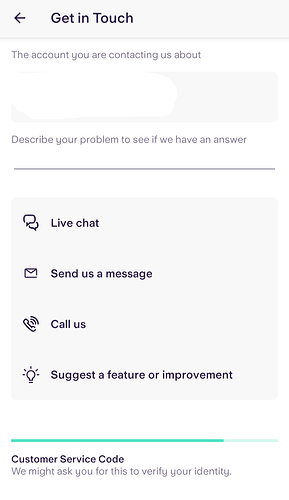 This is the iPhone version. It has it too. 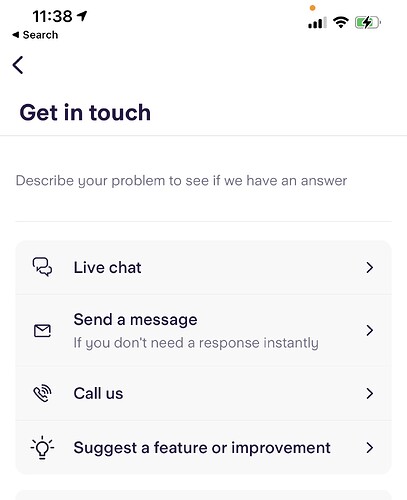 Whether Starling have any interest in taking in customer feedback though, is another matter.

Long been a concern for me.

Back in the days of the Starling forum, it became the norm for one of the developers to join conversations about prospective or actual developments.

That would include challenges, fears and genuine interest in customer feedback. On at least one occasion, I’m sure such chats led to roadmap change or tweaking of a particular feature. That’s got to be rare.

They recently arranged a Google Meet session with me to get feedback on the Business Toolkit. I felt that they were genuinely interested in what I had to say and ended the session believing that at least one of my suggestions may be implemented.

I have just sent a suggestion through the contract us page on the starling app.

To be fair, I had a Google Meet session with them regarding direct debits, probably around a year or more ago. Interesting conversation, and I also felt like they were genuinely interested.

I suppose, to counter argue my original post above, if that was a year ago and it’s still not live, just shows how long it takes for these things to go through the processes. Plus Covid probably altered a few plans (connected cards brought forward for example).

Maybe Starling could now start adding some more features to the connected cards.
We use ours as a second card instead of opening a joint account, but some of the limits can be a bit restrictive.

I wonder what Starling is missing though? At this point they seem to be pretty feature-complete for an online bank.

TransferWise integration? No one will convince me that CurrencyCloud is just as good