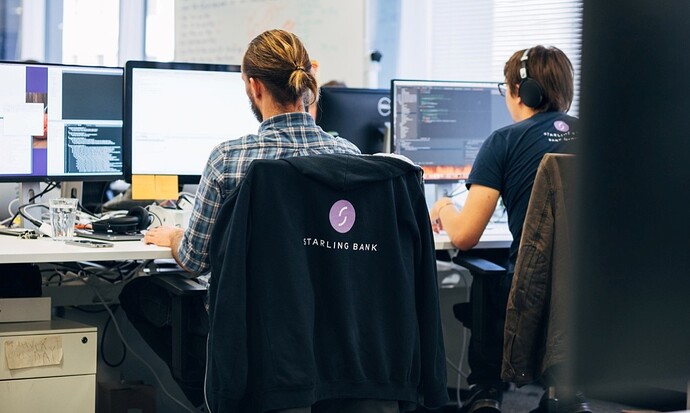 The ads will feature on billboards, busses, online and on the radio from today.

Looks like an evolution on last year’s advertising. On radio now, digital and tv to come…

I hope it will be better than the flying shed, which I feel was meant to be a feel-good type of advert like the running horses; but it didn’t tell me much about the bank or why I’d choose them

I fully realise that Lloyds branding is all about the horse, but I can genuinely say, the horse did not influence me wanting to be a customer and I still think the horse adverts are a bit old school. Still, some folks like that flouncy horsey gallopy dressage stuff.

As for Starling’s shed advert, yeah, bit odd and again didn’t influence me one iota because I was already a customer anyway. I do wish Starling continued success though. I’m still trying to weigh up in my mind whether to go 75 percent Starling with a joint account with the Wife because it would make things more seamless for us.

didn’t influence me one iota

That’s what I always thought about bank adverts. Given that almost everyone has an account with some bank or other already, and they are notoriously unlikely to switch, even if offered a big cash incentive, how do you expect to “persuade” them with some horses or a shed?

I just don’t get it - surely people choose banks based off boring things like their nearest branch, or who is willing to lend them a mortgage or interest rates or quality of app, etc.

An advert never tells you any of that sort of stuff, so it’s very limited in usefulness.

It’s awareness. The next time your current bank does something to piss you off, are Starling then in your mind or do you see the advert while you’re ranting.

Shiny app, funky coloured card, cool features. I know lots of banks are catching up to these sorts of things now but not all banks have all of them.

I just don’t get it - surely people choose banks based off boring things like their nearest branch, or who is willing to lend them a mortgage or interest rates or quality of app, etc.

Or, as with voting, what their Mam and Da tells them to 'cause we’ve bin wiv ‘em for years’.

I suppose so, and really I think I knew that.

But does it actually pay dividends in terms of upping customer numbers? I’m not sure it has a significant impact. Whereas the adverts Starling did at airports, highly targeted to get you to download the app and try them out on your trip abroad, make more sense to me.

Perhaps it’s just me, probably my age, but I can’t get excited about the colour of a debit card. All the fuss and cooing over an orange, teal, black or silver card, sorry, it’s all rubbish in my opinion, but my opinon means zilch to those that find a ‘funky looking’ debit card as the latest cool in their back pocket. And don’t get me started on metal cards either.

surely people choose banks based off boring things like their nearest branch, or who is willing to lend them a mortgage or interest rates or quality of app, etc.

Branches have been closing left, right and centre so the availability of a branch doesn’t influence people to open an account as much as it used to.

Nobody will give you a mortgage unless you’ve already got a bank account, and I doubt whether many people look into interest rates or the quality of the app before opening their first bank account. They only influence people looking for a better deal and most people don’t bother to do that, they stick with the same bank for life.

That was my point - few people do switch and those that do are usually motivated by something. Their branch is closing so they switch to another bank which still has a branch in the town, or they are one of the few savvy customers out there so they are looking at rates and product quality, etc.

The mortgage thing, I was thinking that often a mortgage broker will get you a deal from, say, HSBC but it will be on condition that you open an HSBC Advance account, say. That then might become your preferred account almost by default.

and most people don’t bother to do that, they stick with the same bank for life.

Yup, nail on head. Good friend of mine was horrified when I suggested she might want to look at another bank, but she’s been with Lloyds for 40 years and she aint shifting. Her choice at the end of the day.

Haha, there are lots of them still out there.

But that’s back to my original point - if the average person is so stubborn, they aren’t going to switch on the back of a 30 second advert in a million years!

At least she knows they are “by [her] side”!

It’s not that my friend is stubborn, I think she genuinely likes going into her local Lloyds Branch. That horrifies me, but then the thought of ever going into a branch ever again horrifies me

Well I’m with you - a point of view I simply can’t fathom, let alone understand!

Because Seb, the likes of you and I have moved on. Branches have for me, become very much of an irrelevance. The last time I had to attend a branch for a serious banking appointment, was in 2006 when I swapped my then mortgage from Intelligent Finance, to the Derbyshire Building Society.

Perhaps it’s just me, probably my age, but I can’t get excited about the colour of a debit card.

It might well be an age thing. When I was in my 20s, and easily impressionable, I changed my bank account to Williams & Glyn’s just because they put Esq on cheques instead of plain old Mr.
These days, being old and cynical, Esq would be a deterrent, not an attraction.

I must admit that an attractive debit card would be nice to have, but I wouldn’t choose my bank based on that.

Indeed, you make it sound like a journey of inevitability that, eventually, everyone will join us on! Just that we have arrived at the stage of “enlightenment” early!

Just like cash is becoming, bank branches are becoming dead in the water. I’m not at all sentimental.

When I was in my 20s, and easily impressionable, I changed my bank account to Williams & Glyn’s just because they put Esq on cheques instead of plain old Mr.

Hmm, I’m in my 20s and I do have a Child & Co account just for the card and chequebook. It’s not my only account though, I’ve tried almost every bank (picking up switch bonuses along the way)!

I tell you what, if Starling came up with a financial sweetener for me to CASS our Nationwide joint account over, I’d be on it like a car bonnet, but it would have to be at least 100 quid to make it worth our while as things stand.