I often allow my main balance to drop below zero, though I have money in a number of Goals so my cleared account balance is never below zero.

When my main balance drops below zero, I usually get a notification that states I won’t be charged interest. Yesterday I got a slightly different message that said I may incur interest. I questioned this with Starling Customer Services and got the following response:

Unless they’ve made a recent policy change, this information is totally incorrect. I’ve gone back to them to question it. Also checked the “Interest” screen and it still states that interest is calculated based on overall cleared account balance, so I’m pretty sure CS are wrong.

My understanding has always been the same as yours. Having said that, are you able to reference the T&C on their website. Must say, much of my recollection re: Starling is based on forum chat and less in the formal guidance.

I’m stunned something as fundamental as this should become a thing….

That’s worrying. You’re right, my app still shows a Cleared Balance which includes the money in Spaces, with confirmation that debit interest is only paid when the cleared balance drops below £0: 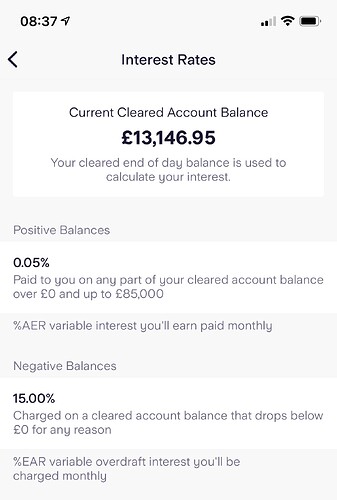 £11,900 of that is in my Spaces, and my ‘current account balance’ (on the homepage of the app, goes minus every month and I’ve never been charged interest. The way the account is set up, statements don’t show Spaces transfers, and just display transactions relating to the whole cleared balance, on the date they clear, so statements differ significantly from what’s displayed in-app (which is a very different approach to Monzo, and one I prefer). I have to admit I haven’t noticed a change in wording on the overdraft notification.

However, having said all that, this page about fees on the Starling website (linked from the account features page) makes no reference to this aggregated approach, and is dated July 1st 2021.

Again, I wonder if this is a very recent, as-yet unpublicised change in preparation for some kind of integrated borrowing approach linked to a credit card and/or bills from Spaces.

They’ve sent a response that doesn’t really answer my question:

"I’ve looked into it and it does appear that it is an error on our end - I’m sorry for this.

I have raised this to our tech team to look into it further to resolve for you, and I’ll reach out with an update as soon as I have one.

Apologies once again for the inconvenience."

I’ve asked for clarification - are they saying they gave me wrong information? Was the notification I received wrong? Is what it says on the “Interest” screen wrong? Disappointed with this interaction.

They are currently onboarding a bunch of new staff. Starting feel that the staff they are getting are not heavy into the product and unique features like this are not well known.

Hmm… this is odd. I hope they aren’t in the process of changing their overdraft policy; the fact that they took Spaces into account when calculating the main balance is/was a real advantage over Monzo’s method of excluding funds in Pots.

I don’t currently have an arranged overdraft with Starling, but took a look at the Interest Rates section of the app out of curiosity and noticed the following, which took me by surprise…

I had a read of their online help article about overdrafts and sure enough: 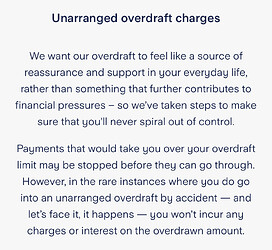 What a nice policy! Charges for going below zero (…with no arranged overdraft, or for exceeding your AO limit) or for rejected payments often hit people when they’re struggling the most, pushing them even deeper into a place of financial hardship, and I’m not aware of a single other bank that doesn’t charge interest on unarranged overdrafts (very happy to be proven wrong though!). Even Monzo, with its consumer-friendly ‘here to help’ image charges 39% EAR, with a £15.50 monthly cap.

First Direct didn’t charge me when a standing order went out to another of my accounts with an external provider, which I thought I had cancelled.

Sent me a text abouch such, which I initially thought was a scam text until I checked my account, allowing me to send the money back the same day it had left and ensure SO truly cancelled.

Ordinarily, I wouldn’t expect a bank to fulfil a SO if it would involve taking the account overdrawn (beyond any arranged overdraft), since I thought the norm was for banks to try and stop any payments that the account balance or arranged overdraft couldn’t cover (in other words, it’s really only offline card transactions that could sneak through). However, the wording on their website suggests that they will fulfil the payment request if they can (status permitting), which I find interesting - perhaps it’s something to do with FD’s ‘personal touch’ style of service, and the fact that they tend to be more selective in which customers they take on in the first place.

As to why you weren’t charged for briefly slipping into an unarranged overdraft:

We won’t charge Overdraft interest if covering funds are paid in before the end of the day (defined as 11:45pm).

I think a fair few banks do something similar in terms of giving until the end of the day as a grace period. With FD, they then charge 39.9% EAR from the following day, with a £20 monthly cap. They also state it must be repaid within 30 days.

Thing is, it was my decision to send the money back to my FD account, as it shouldn’t have gone in the first place (operator error).

However, the text made no mention of having to pay it back quickly:

I know FD have an interest free overdraft allowance, which is £250, but that applies to the arranged overdraft, not unarranged. From the page linked in the text:

no interest charges on the first £250 of your arranged overdraft

Was this a while ago before a change to their overdraft policy, perhaps? Maybe the £250 allowance used to apply to both unarranged and arranged? Certainly nothing to grumble at though as you say!

However, I fear we must leave our FD discussion there as this is about Starling’s current policy

That’s definitely how it has always worked. I think the CS agent gave me wrong information - it would be nice if they came back to me and clarified that.

On the contrary, it was the practice to deliberately let through unauthorised borrowing because the banks could (and did) charge £25-£30 for each increase to the debt.

In reality, I expect old school banks give everyone a second, secret limit, up to which they’re happy to go to in unauthorised overdraft. So, say, if my agreed overdraft limit is £1000, the bank has probably already decided I’m good for £2000 unauthorised borrowing, for certain transactions like bills and food, which means the bank both looks friendly and keeps the profits coming in. Frivolous, ongoing spending though probably results in a sharp recall of the debt (and don’t forget the red mark on the credit files in any case).

I took that screen shot tonight. So unless they just haven’t updated mine yet? It’s possible the CS could be wrong?

On the contrary, it was the practice to deliberately let through unauthorised borrowing because the banks could (and did) charge £25-£30 for each increase to the debt.

I wonder whether now that the regulations have changed and they can’t charge the extortionate fees that they used to, many of the high street banks have changed internal policy on this? Now that the unarranged overdraft charges are just a fraction of what banks used to get away with, perhaps the risk of unauthorised borrowing no longer matches the potential reward for them?

I fully expect that CS are wrong on this.

I’ve received confirmation that the information I got from CS was indeed wrong. I asked for clarity around money in Goals being considered:

"Thank you for getting in touch.

Yes, I can confirm that this will be taken into consideration when the overdraft interest is calculated."

I’m glad albeit a bit frustrated that I was given duff information. I still think they could have been a bit clearer - if I was responding on their behalf, I’d have apologised and said the previous message was wrong and can be ignored.

It does beg the question why I received a different “your balance has dropped below zero” notification. I hope they aren’t planning any detrimental changes to how overdrafts work.