The end for Maestro Cards Why this Maestro is retiring after 30 years

Starting July 1, 2023, banks and other card issuers will begin replacing expired or lost Maestro cards - for instance with a Debit Mastercard

I thought they already had been retired here in the UK at least.
It’s been so long since I’ve seen one.

10 posts were split to a new topic: Motoring nostalgia - vehicles I had, wish I had or wish I hadn’t

It’s been so long since I’ve seen one.

In that case today must be your lucky day, because here you have six in one shot! 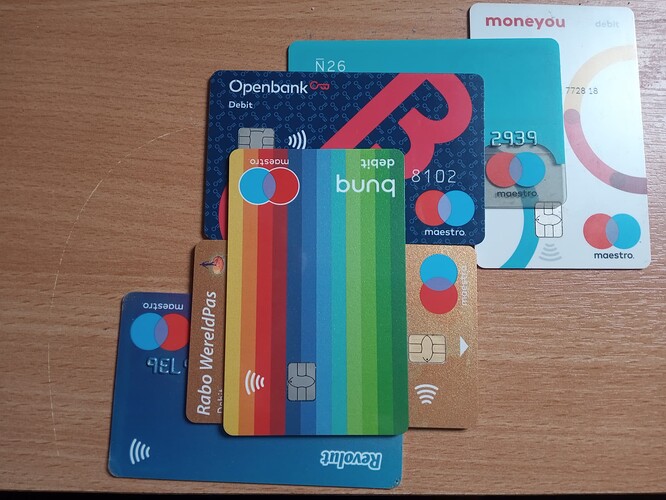 There are no banks left in the U.K. issuing them, so @IvanDP was right about that.

It is interesting that this news is actually only about the Europe region, and Maestro is also used elsewhere (especially South America and Central America). I wonder if it is simply a case of the change being announced for Europe first, or whether they will keep Maestro elsewhere.

My guess is that they will eventually phase it out everywhere.

Maestro has superior coverage in the German speaking areas and Benelux to MC/ Visa.

Revolut Maestro might also end up my sole Euro denominated card to use the Eurozone (without DCC hassle) with KBC Ireland shutting up shop. Though still holding out some hope that another Irish bank will buy and migrate their current account back book.

Isn’t the idea that merchants accepting only Maestro will have to also accept Mastercard now, since the scheme is ending.

Unless you think they will revert to cash or domestic payment networks only?

Revolut Mastercards should also avoid DCC, so Maestro ending there won’t matter too much as long as merchants are ready (as above). I also have high hopes that, in addition to buying KBC’s mortgage book, Bank of Ireland may step in and acquire the current account customers too.

KBC don’t seem to be in a huge rush to exit to their accounts should continue for a while regardless.

Maestro has superior coverage in the German speaking areas and Benelux to MC/ Visa.

Aren’t they probably running on the domestic German payment network??

Maestro was made for pan-European acceptance, not local usage

It’s both: domestic EC-Karte and Maestro for wider acceptance (a combination of wider, most of the EU card acceptance but still with similarly low fees to EC-Karte). Plus Visa Electron which could be thought of as “Visa’s version of Mastero”.

If they only accept EC-Karte, then only Germans will be able to pay by card.

Mastercard’s calculation here, I think, is that they will make more money from “full fat” Mastercard-proper, as this change will force merchants to accept it (and, in turn, accept higher fees). Equally, Mastercard will be able to reduce costs by closing the Maestro scheme down.

Mastercard in Europe is full of historical oddities due to Mastercard having acquired EuroPay (historically, a major competitor in the region). This will enable them to move closer to a single globally-accepted and globally-issued scheme.

OK, but aren’t you Dutch?

True! There’s even a sign telling that when you cross our border.

Are you calling me a cheater?! Flag!

Isn’t the idea that merchants accepting only Maestro will have to also accept Mastercard now, since the scheme is ending.

Yes, that’s the idea indeed and that’s why I as a Dutchie think it is great news! Dutch banks will ‘automatically’ replace the Maestro cards for MasterCards (and Vpay for Visa). For four of the six banks in the picture I even already also have a MasterCard.
But even more important and welcoming FINALLY all card accepting merchants (almost all merchants) in the Netherlands will need to accept MasterCard and Visa.

it is great news! Dutch banks will ‘automatically’ replace the Maestro cards for MasterCards (and Vpay for Visa)

Exactly what I thought would happen!
That is, indeed, great news.

The situation in Germany is slightly more complicated, though, as Maestro there has been generally co-branded with EC-Karte. German banks may try to issue EC-Karte only cards instead of going to full Mastercard, which would remove any benefit as merchants would then also have no incentive to accept Mastercard.

Acceptance for everyone else would therefore be just as bad as now, if not worse! However, given COVID’s nudge away from cash-centric thinking, I doubt this will happen and I do expect them to begrudgingly adopt Mastercard too. Otherwise Germans would not be able to use their cards outside Germany, which I doubt they’d do.

I was planning a trip to Amsterdam next year.

The situation in Germany is slightly more complicated, though, as Maestro there has been generally co-branded with EC-Karte.

I always looked at Germany with a little surprise how they handled that.
At the time Maestro was introduced in the Netherlands we had our own local payment circuit and card called PIN and our banks issued co-branded cards (they already did that for us to be able to pay and withdraw abroad). But as the merchants all started to accept Maestro, Dutch banks stopped issuing co-branded (Maestro&PIN) cards and the PIN-circuit does now not exist anymore.

Though the PIN card and circuit do not exist anymore the Dutch still call paying with their payment card ‘PINnen’. And (though PIN does not exist anymore since 2012) sometimes you can still see the logo below at merchants when they accept Maestro and Vpay. 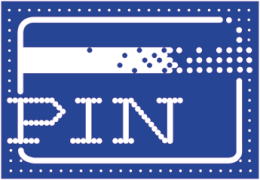 Yes, technically - Girocard is the official branding, but Eurocard and Eurocheque (from EuroPay, now absorbed into Mastercard) were big in Germany before they evolved into Girocard as a national scheme once Eurocard was defunct. The locals then “replaced” Eurocard branding with EC-Karte as the common slang name, I believe, now referring to Girocard. So Girocard is commonly known as EC-Karte to Germans.

@Oberoth is more the expert though!

Girocard, on a technical level, works a bit like iDEAL in that it effectively initiates a point-to-point bank transfer so fees are almost nothing for merchants. That’s the only reason they’ve kept it, I think, the low fees.

Of course, it also means consumer protection for Girocard purchases is non-existent.

I’ve never had an issue with using the Maestro where they didn’t accept ‘credit cards’ ( i.e. Visa / Mastercard) in Germany, Austria and the Netherlands but obviously can’t speak for all instances.

I don’t know what they will do as the benefit with accepting Maestro/VPay (from their perspective) would have been they are always a debit card - if they display the Mastercard/ Visa logo then they effectively be expected to accept the debit and credit versions.

I thought the benefit was the lower fees for merchants, not necessarily that is was only debit.

Theoretically, you would want to expand acceptance (as a merchant) as it would help you make more sales - but I know they may not think that way.

With relatively few locals having credit cards, would this be a massive problem or not?

The last time I used mastero was midland bank I think as sure was around with the now gone solo switch and electron Visa cards.

Switch merged with Maestro in 2002. I did like the logo…

If Switch was still around Starling would have had to choose a different logo because it’s too similar to the Switch logo. The only difference is the colour.