I wonder how you could buy National Rail tickets online for example and then collect them from a machine, since doing so requires the payment card used to be inserted upon collection.

That isn’t my experience. Just double checked and here is my confirmation email from the last time I booked a train ticket online: 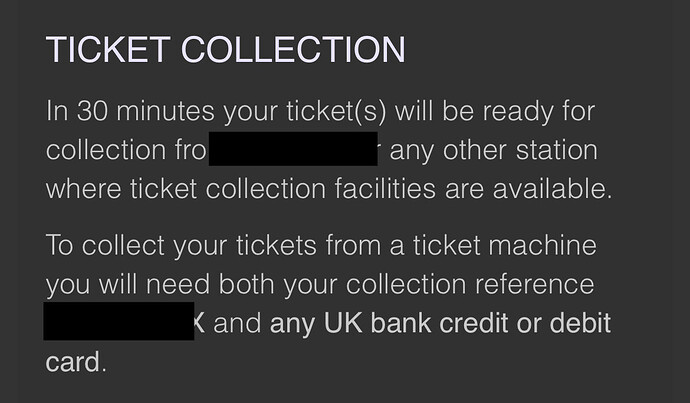 Notice it says “any” card.

That being said, there are definitely places where this might be a problem.

Interesting… what’s the point of bringing any card? It doesn’t prove you’re who you are

what’s the point of bringing any card?

I often wondered the same

I have always had to type in the reference as far as I can remember. And I always used the actual card to pay for my tickets (ie no Apple Pay or similar)

Huh interesting. Which ticket booking website was that from? I’ve definitely always been instructed to take the same payment card, unless as I say I used Apple Pay at the checkout. 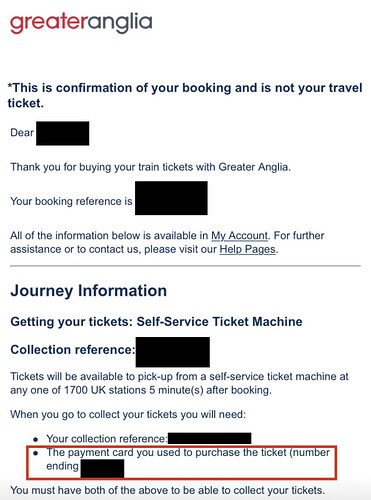 I have always had to type in the reference as far as I can remember.

Yes, me too, even if I insert the same payment card.

Just checked a booking confirmation I’ve got from GWR as well and they too demand the payment card: 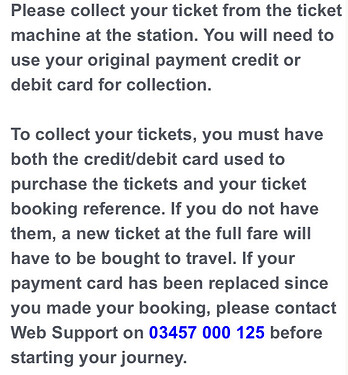 I wonder why Southeastern doesn’t but Greater Anglia and GWR do? In my experience, The Trainline demands the actual card upon collection too unless you paid using my Apple Pay (but I try not to use them because of the booking fees when ordering through any TOC is free and often uses Trainline’s platform and interface anyway - eg Greater Anglia!).

I can’t really remember the detail on this right now, but I think the ticket purchasing website can choose to require the card or not.

If it’s a corporate ticket, for example, any card is allowed to “claim” it.

If it’s a ticket for an individual, only the purchaser can claim it, often.

Even if a different card is used, presumably it records the card details for investigation later if somebody claims they can’t get their ticket (and somebody else may have claimed it first)?

The ticket office can retrieve the tickets with just the reference but it charges the ticket provider a bigger fee for issuing the tickets than the machine - hence why they rarely mention that option.

The matching card number is an anti-fraud measure, nothing more.

The thing is though my local station’s ticket office is open for a couple of hours during morning peak and that’s it, so as far as ticket collections are concerned it’s useless for me and I absolutely have to use the self service machines.

The matching card number is an anti-fraud measure, nothing more.

Yes, I assumed this. Shame there can’t be a collection PIN or something in addition to the booking reference instead of needing the physical card.

Indeed, and some stations on the network have a machine only, so you are stuck there!

To be honest, with the rollout of mobile tickets and longer term plans to allow “loading” a ticket onto a debit card, credit card or NFC device (similar to TfL contactless but with the additional ability to pre-purchase a ticket) this problem will go away anyway.

And not before time, because those ticket collection machines are always disgustingly grubby and never seem to be cleaned!

I traveled to London by train the other day and purchased a Travelcard (my village station to London and back + unlimited zones 1-6 travel) and was able to purchase it in the Greater Anglia app and then load it on to my Greater Anglia Smartcard using my iPhone’s NFC. I could then use the Smartcard to tap in at my local station and tap out at the London terminal, and it worked just like an Oyster on TfL touchpads. Pretty awesome! Sadly this isn’t available on the longer distance routes I take that go across multiple operators so I’m still dependent on paper ticketing until there’s unification of the whole smartcard system, presumably under Great British Railways.

Pretty much all journeys are now available as eTickets, so you can either load them into the relevant app on your phone, or add it to your phone’s wallet. There’s really no need to be bothering with the hassle of carrying around paper tickets in this day and age!

The future is already here!

The “Rail Delivery Group” (a consortium of train operators) is already working on a network-wide solution, so it shouldn’t take too long before every train company is on board.

I don’t like e-tickets to be honest, since if my phone dies (which is quite possible after a long day out) I don’t want to be stuck without transport home. I find Smartcards to be the perfect solution for me I think: can be loaded anywhere, anytime, more durable than paper and not battery reliant.

Pretty much all journeys are now available as eTickets

You can buy m-Tickets and travel on participating services with:

You can also use m-Tickets to travel on the following train companies’ services on participating routes:

Edit: Taken from the National Rail website, so apologies for the names of a couple of them not reflecting their current franchise name.

Edit 2: Realised you said e-Tickets, rather than m-Tickets, which do seem to be available on more TOCs, including TSGN.

I think that list is a bit out of date. Southern certainly have e-ticket acceptance now on a lot of their routes. I think the restriction is whether or not the station has QR code readers - so my closest station doesn’t, but if I go to the larger station just up the road I can use e-tickets (as I did last week for a trip down to Brighton).

Worth noting as well that there’s a difference between mTickets (which are only accessible in the train company’s app, and need to be activated before use - so you need internet connection at the time) and eTickets (which can be accessed via via app with no activation needed, or added to Apple/etc Wallet, via the QR code from an email shown, or even printed out on a slice of dead tree).

Yes, just added a comment to reflect that - there’s a difference between e-Tickets and m-Tickets. I think the list is correct for m-Tickets, but you are right that e-Tickets do seem to be accepted pretty much everywhere.

Yes, the only issue I’ve found is when making cross-London transfers via the Underground, as TfL gatelines aren’t set up for reading eTickets).