I used to have curve, I actually got rid of it twice.

I just tried to create a new Curve account for the £10 referral via TopCashback, only to be told that the account I closed in 2020 is still there, with my mobile number attached to it, so I cannot create a new account, but can re-open my old one

Only need the darn card because BarclaycardPay will not work on my latest phone, so need a shell for the contactless (non-carrying card) feature.

As my Tesco CC is also not supported by GooglePay, I may add that one as well.

Don’t know what it looks like yet, as cannot get back into it yet

When I closed my account all they did was put ## at the beginning and end of the email address. It basically meant that I could still log into the account and prove to them it wasn’t closed.

It did get more reliable, and I used it especially for instant notifications where the underlying card didn’t support them. Plus it was better than many cards when travelling with better exchange rates / less fees.

With less travelling and more cards offering instant notifications / ability to see pending transactions in the app, it’s had less usage of late.

I still like it for not having any number details on the front though, which I wish more traditional backs would adopt.

Yeah, I have seen that posted by others elsewhere too.

If I had changed my number though, I could have opened a fresh account, with a different email address, and received a cheeky tenner.

As it happens, I am not that concerned about the tenner, was more the ability to carry my Barclaycard, without actually carrying my Barclaycard.

Do transactions still appear as CRV* or similar, to identify payment through Curve?

Yes, and, whilst technically online transactions, have the location of London, which caused one of my CCs to invoke their fraud triggers whilst I was travelling and had used it for both local and Curve transactions.

Your title extension would make a great WhatThreeWords destination. R-

From experience can you make a card payment with a virtual curve card after signing up, do you think that would trigger the eligibility for the top cash back offer?

I beleive its a £5 card fee for a physical one?

I have an account but don’t activity use it. Only reason I keep the account is it can act as a bridge between Garmin Pay and Monzo. But I don’t need that very often.

Regarding Amex. Not sure what else they could have done. I didn’t follow it closely but what I recall is Amex blocked Curve.

I think part of curves issue was the fact that they tried to blame it on AMEX when it was obvious to everyone on the community that they were at fault for making a series of assumptions and then not actually trying to work with AMEX.

I still have a Curve Card and still use it occasionally.

My biggest issue with them is how they change their T&C and don’t necessarily follow British consumer law (imo) in their T&C.

They also suffer from poor CS and a much less compelling product since they introduced ‘Curve Fronted’.

I did use it from time to time.
Can always tell it’s a curve transaction with CRV in the feed!

Curve forgot that they were using AmEx network for processing and can end the relationship at any time for any reason, as is stated within every merchant contract on planet earth

I don’t believe for one moment that Curve forgot about anything. I understand AmEx had two particular axes to grind with the whole concept:

Had Curve actively engaged with American Express early on, these things would have been quite clear from the start.

That way AmEx still get their higher fees, provide good customer service and it’s not so easily accessible; it would only be worth it for high spenders at lower types of outlets, not all the retail AmEx clients that are going to their local takeout (i.e. the ones who wouldn’t want to spend on fees)

In another nice piece of news, both of our card machines at work now accept AmEx, they did it without asking too (Lloyd’s Machine) 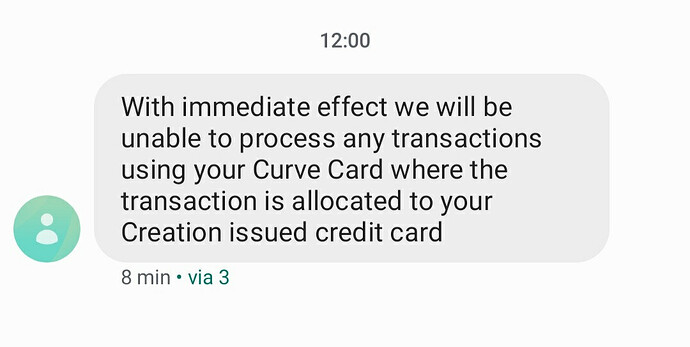 I wonder what had caused Creation to block Curve transactions

Hmm. Hope Barclaycard doesn’t go the same way as Curve is the only way I can use it in a mobile wallet.