I had the same problems with algebra - back in the day

Problem resolution to my issue not looking promising. Got a response requesting more info within a couple of hours, to which I responded immediately. I sent a chaser after 24 hours. Both my response giving info and the chaser are showing as Not Yet Read in the app.

I’m fairly cool about it, I loaded £100 to the card, the meal was £94, so the most I stand to lose is £6. But my balance is currently showing as -£88 which you’d think might concern them more than me. After I get this sorted it’s going in the drawer. I may look at it again after Feb if Chase do end up changing their Cashback scheme by that point.

Yeah, I have no incentive to continue to use it, now I’ve for it, tbh.

I know it’s only pence, but it means the account is not acting as it was advertised.

Card in the safe. Only used online and via Curve/Google Pay.

I spoke to them today they said they are working on making Cashback show differently but it’s not being rushed as it falls in line with their overall improvement plans as they scale up.

They said in their words: “ With regard to cash back, this can take a week although it can also reflect sooner. This is something we are working on speeding up but in the interest of honesty this could take some time as it falls with a number of different improvements as a part of our long term road map as we scale.”

I’ve used mine last week (Thursday) at the pub - cashback came through yesterday at 3am for the three real transactions.

Improvement in the speed cashback added to my account this week.

I’ve had no feedback from them, but logging in tonight I see that my double transaction has now been resolved.

A few days ago, they asked me for my opinions on the cashback. The slowness is what I spoke largely about. And now they improved it. Nice!

Hopefully the actual flow improves too.

Used this a few times to try it out. Not bad for an early stage app, worked quite well actually. 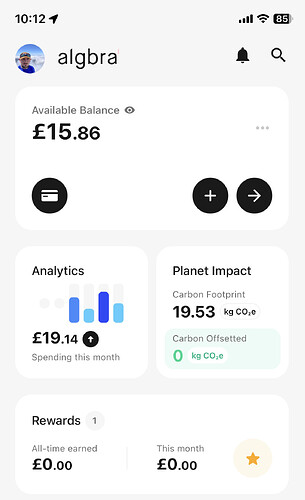 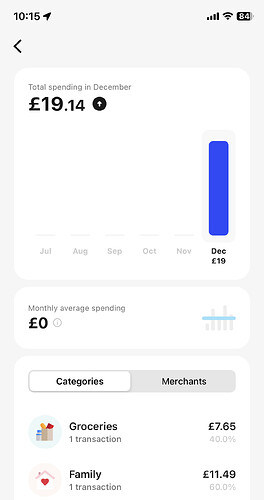 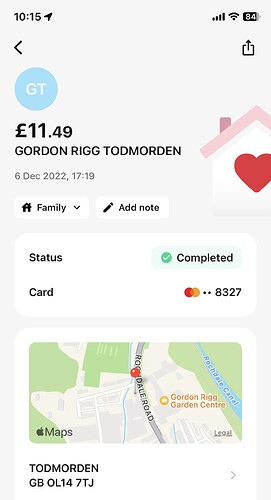 It’s decent. Plus the card worked without a hitch which is nice.

I’m really liking trying this app out. I can easily see it become my main day to day spender, I’m just a little wary of doing this currently since it’s such early days.

The general UI and also the sustainability edge seem to be the best out there. And that card is super nice.

But that’s the good parts. There are some areas that make me wary.

I can’t find much on the website around exactly what’s next and the events seem to have mostly been around Feb this year (with a few monthly meets for specific things).

Also, some big names in the investors too, I can’t work out whether this actually has legs or whether it’s just putting a good face on.

Would be good a good acquisition just for the app alone.

Would be good a good accusation just for the app alone.