This isn’t really Algbra specific - Coop hold up a fair few transfers especially if your account is new. If you call them up and seem too clued up about the fraud process they’ll use even more of the 24h FP window. In time I’ve had no issues sending money from the Coop to Revolut, Zopa, Raisin, Dozens, Triodos etc most of which use/used third party payment processors.

Happy with my algbra account, but must admit, I wish the cashback wasn’t daily as you don’t really notice you’ve earned anything that way.

Although it does tell you the monthly and aggregate earnings below, I suppose

Is there maybe an option to store your cashback on some different account or vault maybe?

Cba to move it manually.

Not a major issue though as not being used again now. All spend gone back to Chase for now.

A beacon and a movement.

I’m not a user of this product, but I must say that blurb above is a triumph in creative writing. Someone (the author) overdid it, methinks.

Looks like whoever writes the starling update notes has competition

The starling guy isn’t half as good as they think they are. They’re more cringe than Monzo! Which is saying something.

Algbra’s marketing fluff there reminds me old school atom bank, back in the days of their pre-launch landing page. The tone is just right. It’s just so that I can appreciate it, but not so far that it makes me cringe.

Should I lodge a complaint then, as definitely got a card and not a key

I can appreciate it, but not so far that it makes me cringe.

I have to respectfully disagree, the whole post (by them) above makes me cringe. I love the passion but it strikes of either someone trying to really push a product that doesn’t really do what it says OR being so far down the hole of belief in their product they can’t connect vision to reality anymore.

Now, I’m not saying any of those things are true for Algbra. I actually quite like the app, the ethos and the mission. I would even consider using them one day, especially if they supported Apple Pay and became a regulated bank.

For me there are too many companies trying to be human. Or be like Google and “Quirky”

I’m less interested in whether they are becoming a beacon or a footstool. More about what the update did and what I can expect to receive in the product as a result.

I love the passion but it strikes of either someone trying to really push a product that doesn’t really do what it says OR being so far down the hole of belief in their product they can’t connect vision to reality anymore.

Think of it like Apple’s Think Different advert. They’re not selling you a computer with that. But if you interpret it that way, it probably has the same affect as this blurb.

It’s why I praise this sort of marketing. People can get behind the vision, and those customers are the ones who exhibit extreme brand loyalty. But most companies either don’t even try at this, or royally suck at it (sorry Starling) which creates a disconnect. It’s why I went to Monzo for refuge as opposed to Starling when N26 left the U.K. for instance. I saw how both banks responded to it. Starling we’re as tone deaf as ever. Monzo were sympathetic to the customers and employees it affected.

It reminds me this Ted Talk in a way, which is completely irrelevant and off topic, but very interesting: 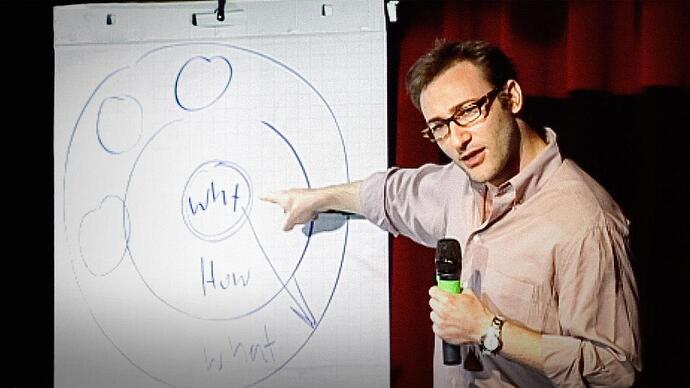 Simon Sinek has a simple but powerful model for inspirational leadership -- starting with a golden circle and the question: "Why?" His examples include Apple, Martin Luther King Jr. and the Wright brothers ...

It’s not an advert for their product.

Oh I understand this, but it’s kind of my point. Apple could’ve just said “This Mac is great, you should buy it” but by focusing on the simplicity, the unknown, the secret they could build that curiosity in someone to such an extent they could get them to wax Lyrical to others about their product over time. No need to have an advert because you’ve bought people onboard to the ethos and that is enough to sell things.

Algbra are trying to do this too, but it’s a lot of fluffy words and it starts (or can start) to turn customers off over time. Think of the simplicity of Apple marketing and the powerful impact it has. Too many companies try to copy this but poorly, and that was my point.

You can say all the fancy words you want, and you can truly believe it in and be passionate, but if you can’t successfully bridge that gap the customer won’t get onboard and you won’t sell anything.

Ugh - that still triggers me. I mourn the loss of adverbs…

I mourn the loss of adverbs…

Here you are : Hope this makes you feel better.

Pages for logged out editors learn more An adverb is a word or an expression that generally modifies a verb, adjective, another adverb, determiner, clause, preposition, or sentence. Adverbs typically express manner, place, time, frequency, degree, level of certainty, etc., answering questions such as how, in what way, when, where, to what extent. This is called the adverbial function and may be performed by single words (adverbs) or by multi-word adverbial phrases and adverbial clauses....

Hope this makes you feel better.

It was interesting to read that this is nothing new - flat adverbs (e.g. drive slow, dress smart) were used commonly in the 18th and 19th centuries, although it was almost exclusively among the illiterate population.

And there was me, thinking that adverbs were boring - clearly not

English is an outlier among Germanic languages for differentiating formally between adjectives and adverbs. Bloody influence of the Romance. There’s no formal distinction in modern German, for example. Ditching adverbial forms is more of a shift back to our Friesian roots