Today I received a notification indicator for the iOS Wallet app. Opening it up I found the following alert against my Barclaycard Rewards card:

I’m not entirely sure what’s going on but assume it’s a behind-the-scenes tweak to the way Apple Pay transactions are processed with Barclaycard. Even a quick google didn’t reveal much; although I did find this: Apple Card debuted in 2019 and has added a handful of new features and perks since then. With this fall’s release of iOS 15, Apple Card is adding another new security feature that Apple is calling Advanced Fraud Protection. Since its launch, Apple...

Had the same message for my HSBC debit card! Nothing for my Lloyds TSB debit though…

Got it on my Nat West debit card also.

Curious… I also have a Nat West debit card in iOS wallet (one of the new crayon-inspired Mastercard debit) but didn’t receive a notification for that.

I don’t have an iPhone, very much an Android person (sorry). Seems like an interesting feature though. Anything to add an extra layer of security, without the inconvenience

I got it for my Wise Debit card, but only received the notification yesterday evening after updating my phone to iOS 15.5 Developer Beta 2, so assumed it was a new beta feature at first?

It sounds like Monzo and Revolut’s location-aware security feature, with Apple basically sharing the general location of your phone with your bank to help identify where you are (and therefore allow for automatically declining transactions attempted in another country, etc).

On closer inspection, all my Visa cards now have the following message in the Wallet app settings: 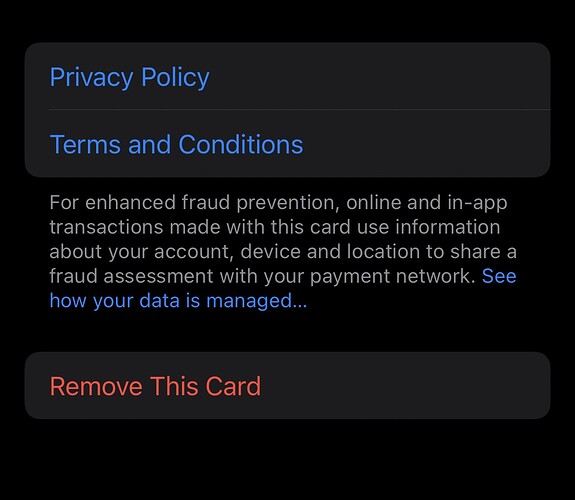 It doesn’t seem to (yet) be available for Mastercard or American Express. 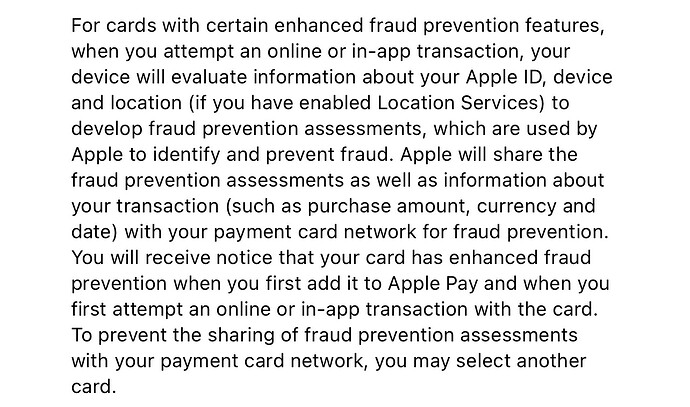 It seems to be a global Visa thing.

Not seeing anything like this for my Visa cards in my wallet.

Which version of iOS are you on?

It’s probably only enabled for iOS 15.4 and later.

Which version of iOS are you on?

I’m on 15.4.1 and my Barclaycard Rewards Visa is my default card.

Perhaps leave your phone charging while connected to Wifi for a while and it may magically unlock. I would guess that this was provisioned via an Apple Pay update, which the Wallet app automatically checks for at least once a day. It may be the case that your phone simply hasn’t installed it yet.

The same process is used to “unlock” Apple Pay in new countries.

My Tymit Visa card doesn’t appear to support it either, just Barclaycard Visa showed the notification. Unless… you only get one notification for the first Visa card in your iOS wallet…? In my case, that would be Barclaycard Rewards (even if it is 4 cards back)

No doesn’t show on my Tymit visa either

Yes you do, and it’s seemingly random which one it is too!

If you look into the card options screen (the ellipses button when selecting a card) you will see it’s enabled if you have the information about it at the buttom of the screen - as per my screenshot).

In my case, that information is there on every Visa card (both credit and debit) but I only got one notification - Wise, which was in the middle of my Wallet stack.

So I was looking in to that, and despite getting notification for my Barclaycard this morning tapping the ellipses does not show the text in your posting.

I’m sure it’ll be useful though!

It’s possible the text has actually only been added in iOS 15.5 Developer Beta 2 (since that’s the version of iOS I’m running).

I’m not sure if it appears on release versions of iOS or not yet.

The text has now gone off my cards I’m on iOS 15.4.1 maybe an accidental release

I’ve just checked my Visa cards and it’s gone too, on iOS 15.5 - it was probably accidentally switched on, as you say, and was meant to only be enabled on Apple internal builds.

This would likely indicate a planned release with iOS 15.5, probably in early June around WWDC.