For those who bank with Monzo, are you using a paid-for account?

I see this as the big existential question for the future of the bank:

How much do you pay to bank with Monzo?

And for those on the free account, what could convince you to pay?

Having gone #FullMonzo * I hope their freemium model works out. The bank’s losses were drastic last year.

I have a hunch that more than 2.7% of this forum’s Monzo users will have a Plus/Premium account… 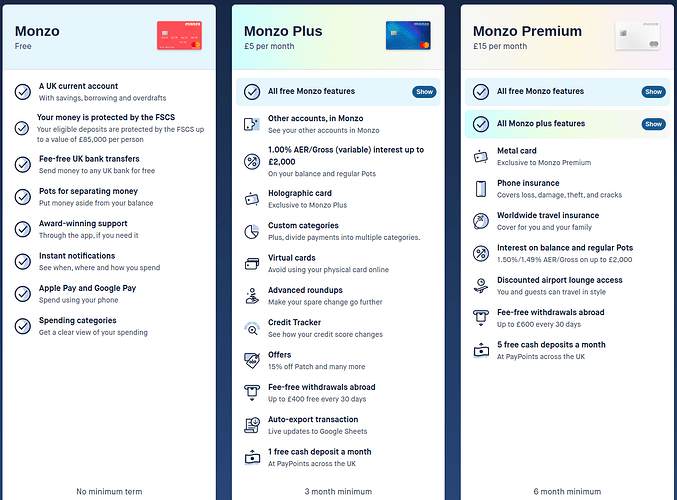 I did have Monzo Plus in the past. I was lured by the two months free as a previous plus customer, so the experience only cost me a fiver. I generally liked what was on offer sans the lacklustre offers, but there just wasn’t enough to the feature set (yet) to warrant my continued subscription so I cancelled.

For me, it won’t take much to tempt me, and I reckon if they nail what I’m looking to get out of it they could wind up solidly locking me in to Plus. This version of plus feels like a very polished experience this time around, which is great, I think they’re finally getting it right, and they’ve left clear room to improve upon it and expand, which offers some promise too.

All I’m essentially looking for is some additional powerful utilities to tie in to the virtual cards feature. Allow pots to be set as a spending source, and then link those to virtual cards in Apple Pay would go a long way to solving my woes with pots as they are now, and the shortcomings of Summary. Those budgeting tools as a whole could use a little love and some additional coherence, which seem to be on the cards now and coming soon too.

Small enhancements like that could turn the feature set from a nice to have into something I wouldn’t want to live without. That’s the point where I’ll gladly start handing over my money. And you know, at this point, I think they’ll actually achieve it. Things seem to be looking up for them, and they’re starting to deliver some nice little enhancements again.

If they did all of this I’d be willing to pay for the £15 option rather than the £5 option.

Unless all these paywalled features are free elsewhere, in which case monzo is permanently holed under the water

Could have written that myself. Was very disappointed that the export to Google Sheets was Monzo only transactions. R-

If budgeting support is a genuine need, I can see the draw towards a fee - but I’m not sure what that support should look like.

I do struggle generally, though, with the whole fee-paying thing. In any event, £15 feels like a lot.

I wonder if it makes more sense the more complex one’s finances are….?

I recall making my financial affairs very complicated but that was simply because I was exploring the whole “Pots / Spaces” thing with Monzo and Starling - then throwing IFTTT in for good measure. I had funds flying around all over the place - just because I could.

I’ve settled down since then and taken the heat out of the system.

I think I make my finances more complex than they need to be.

Yep - I’ve been there (see above

That’s an interesting admission. I bet we’re not alone….

One small point worth bearing in mind is that virtually no one on the £5/£15 tiers pay that much net. The 1%/1.5% interest will always offset the cost somewhat.

I run my own budgeting spreadsheet, and tend to avoid cash where possible, so the value of having to not input small transactions or download .csv files periodically is worth the £5 less interest for me alone. It works out at around £1 per week and it’s useful on an almost daily basis.

These will never happen, but the vast majority of stuff offered at the Monzo Plus price point is available free elsewhere. It’s pathetic

As much as I applaud all of the fintechs for trying to entice customers with their paid offerings as a way to generate loyalty/income, until they are able to offer something comparable to some of the legacy banks packaged accounts I fear they are on a road to nowhere.

I do struggle generally, though, with the whole fee-paying thing. In any event, £15 feels like a lot.

I feel that convincing me to pay for an account is a very high bar. With traditional packaged accounts, I could imagine theoretically doing it at some point in the future if I’m married, can have a joint account and need all the insurances anyway. That way, the fee can actually be spun mentally as a saving, since I would be getting much more insurance than I’d really be paying for.

The problem with Monzo Plus and it’s ilk is that you are essentially paying for software. Viscerally, this irks me. I know that the “work” has already been done, and features are not really being added regularly on an ongoing basis, so what is the fee really for? It’s just “because they can”. Equally, it irritates me as a free user that features where the investment has already been made (paying someone to code them) are being artificially held back from me just because they are “paid features”.

Paying for some software, like Microsoft365 or Adobe Creative Cloud, doesn’t feel like this because it is being constantly updated with new features, so that is what you are paying for. Not the case with this proposition.

I’m also totally unwilling to spend money on a debit card. The card might look cool, but it’s not necessary, and it doesn’t do anything more than my bog-standard card. I don’t like to attract attention anyway, so would actually find it vaguely embarrassing to use. Finally, I almost always pay by credit card, and usually via Apple Pay, so there would be even less point.

So with all of that said, I find myself concurring with @IvanDP:

until they are able to offer something comparable to some of the legacy banks packaged accounts I fear they are on a road to nowhere.

However, as a “young person” with the attitude of an old one on this, I do think the offering is likely to be popular with “selfie generation” Gen Z users who want to impress their friends and show off their card on social media!

I agree with your comments, and I am definitely not a “young person”.

Well, maybe on the inside I still am

You’re as young as you feel!

I feel old in my approach to lots of things.

(By the way, I put “young person” in quotes as a nod to how it’s often invoked in a “think of the young people” kind of way in political circles as almost some of kind of sop, which I hate - there is nothing worse than one person asserting that they speak for a whole demographic, I’m well aware).

I like Monzo and even became a shareholder. However I can’t get them to take security seriously. The view is; that as long as someone else can’t easily take money from your account then it doesn’t really matter if they can get in and see everything. I’ve pretty much given up trying to get them to see sense. But meanwhile only a small number of transactions will continue on the account as I move the bulk and eventually all of my business elsewhere.

However I can’t get them to take security seriously. The view is; that as long as someone else can’t easily take money from your account then it doesn’t really matter if they can get in and see everything.

Can you not protect the app with biometric security? I think Monzo makes the distinction between security and privacy at just this point. I know not everyone agrees with this.

The biometrics on my device do not work well with Monzo. They work fine with other Apps! ?? It’s bad enough that every few times it gives up and logs me out. I don’t know how the API works, but it seems that the Monzo implementation is faulty here, doesn’t retry enough, sets incorrect timeouts…something like that.

So I should have an alternative like a PIN. However the App also switches off security whenever there is an update or whenever I log out and have to log in again via email message. So it’s always down to me to try to remember to secure the thing. I think the flag is held in local cache. So as a result I have to be very careful if I want to have my account secure.

Because security is so weak and I have tried to persuade them but Monzo are not interested in fixing it (in writing from them) I use a Bitdefender feature as a temporary fix to secure the App, but really, for a bank ?? Surely they should do better.

I agree about their distinction between security and privacy which is as you say. But access to all my banking details is not just a privacy issue, it provides a lot of information for any would be Identity Thief which is definitely a security issue!

So I can’t take them seriously, or put my main funds with them or rely on them to handle anything sensitive.

If I ever went back to Monzo as my day to day bank, I’d need Premium to match the FlexPlus offer for £15-£17pm and then I’d pay. I don’t need a discount on fancy plans, I just want breakdown cover

I don’t mind paying for software enhancements (don’t really see as any different to paying for any other software). But not willing to pay £5/month. I’d consider £2 to £3/month for Monzo Plus software aspects.

If you just want basic breakdown cover, you can get it for £10pm using Monzo Plus and RAC cover.