Apple Card in the UK

A bit like the John Lewis and Waitrose Partnership card, where the card is run by HSBC but you get quite good cashback for shopping in Waitrose or John Lewis (and much lower cashback elsewhere).

One can no longer apply for a John Lewis/Waitrose card from HSBC.

Their credit card is moving to Newday.

I feel sorry for all cardholders in this case. New day are very challenging to deal with. Very sub par lender

I too find this rather disappointing news. My Partnership Card is my oldest open credit card account, and although rarely used these days it is reassuring that it’s there, and that it’s issued by HSBC. I realise there’s probably some flawed logic there!

They are indeed very garbage. Some of their processes are like pulling teeth, 100% with the intention of making less people likely to go through them

I’ve no doubt you are right, but what a strange business model. Surely they make money from the card business, or do they have fingers in other pies that offsets the hassle? R-

do they have fingers in other pies that offsets the hassle?

I don’t think they’re anything more than a mobile lender. They’re actually quite high on the innovation and cost reduction front, too; they do credit building cards but also virtual only cards (called Bip, iirc)

Edit: just went on a long journey; Cinven Group Limited / Cinven Partners (part of Cinven Group) own NewDay and all of the little subsidiary companies that have that kinda name; it’s largely owned by pension funds as a result of the ultimate group ownership (mainly US/European). They own lots of stuff, not just NewDay

I had a Newday Amazon card for a bit. It was fine.

I’ve also had an Aqua Reward card for ages, which officially is a credit-building NewDay card. I’ve actually always found it very good, and service has never been an issue on the few occasions I’ve used it.

They have already announced in that press release that rewards won’t change, which is good, and NewDay have much better apps than the existing John Lewis Finance one. The NewDay API will also mean the card will gain access to Open Banking, so this is probably a good move overall.

Probably a good shout, someone that can take NewDay further would be a better idea. On top of that, there’s a lot of room I think to have cross-country credit lenders that can make world-wide usage of data.

They‘ve also lost business from the Arcadia group collapsing so it’s no surprise that they are currently on the lookout for new partners.

What’s interesting about this deal is it seems to imply that existing HSBC cardholders will be migrated over as well (unlike the Amazon situation, where NewDay are keeping the customers and Amazon are simply “taking away” their right to use the brand). So it’s more like when Jaja acquired various cards from Bank of Ireland; in that case BOI were selling their portfolio directly. There seems to have been some degree of co-ordination between the various parties and, reading between the lines here, it seems that HSBC likely wanted out as well and John Lewis wanted better digital offerings for customers (which isn’t surprising, as HSBC seemed to make very little effort on that before). Overall, then, it’s most likely a mutual parting of ways.

Debenhams was a huge partner of theirs as well.

I received the letter below. The way I read this is existing Partnership Cards may be closed or turned in to regular HSBC credit cards. Those customers wanting to retain a Partnership Card will have to apply for a new one from NewDay - a leading credit provider

This doesn’t seem very customer friendly and certainly not what I would expect from John Lewis. I was expecting our accounts to be migrated over seamlessly. 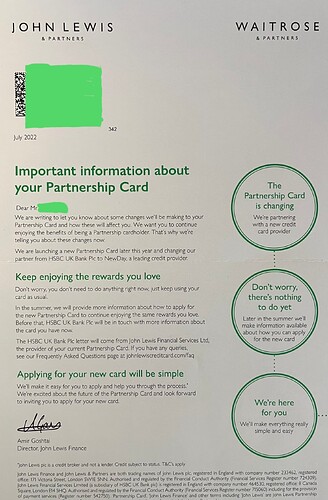 Yes. It appears HSBC won’t sell their book of customers, so essentially what’s happening is John Lewis walking away from that partnership and setting up a fresh one somewhere else.

What happens to the existing John Lewis Finance customers is up to HSBC - they could close them down, rebrand them, merge them in with their HSBC UK/ First Direct/M&S Bank books or sell them on separately.

Makes sense, HSBC are a big player. They’ve really not much need to play ball with JL, since doing so would only negatively impact their asset sheet

The John Lewis demographic are obviously desirable - they will skew older, with more disposable income, so are likely to spend a lot and generate a nice steady income in interchange alone. They are also probably the type who would just use the card abroad without worrying about the additional currency conversion charges. Obviously there was value in it for HSBC, or they would never have entered into the partnership (no pun intended) in the first place.

It seems like John Lewis were unsatisfied with the amount of investment that HSBC were making in digital platforms (their app is poor) and also not that keen on the tight HSBC lending criteria, so have opted to walk away and partner with NewDay instead. HSBC will most likely just convert the card to a HSBC-branded one.

Unlikely - the interchange cap is 0.3%. JLFS will get a cut of this, in exchange rewards worth 0.25% of spend are paid out to the customer.

Perhaps JLFS got a small discount from JL for purchasing store credit in bulk, lets say 10%, and lets assume for the sake of easy numbers they got the full 0.3% interchange fee (they wouldn’t have but they certainly did not get more). That would lead to a net interchange gain for JLFS of 0.075%. Seven and a half hundredths of a percentage point.

More likely they made absolutely nothing per-transaction. All this to say nothing of the costs of providing a credit card service…

I presume JL paid JLFS a significant commission on in-JL spend, which is perhaps what kept the thing viable.

Obviously there was value in it for HSBC, or they would never have entered into the partnership (no pun intended) in the first place.

Pre interchange fee cap. It was also in the era when HSBC seemed to be getting in to bed with retail partners, M&S was another. The fact one partnership is ending and the other has being significantly scaled back rather paints a picture that perhaps HSBC didn’t really get what they were seeking.

Relatively low, as the customers would have been mostly “in good standing”, credit-wise, so you wouldn’t have had to deal with a large number of defaults or customer service issues.

Most of the technology and back-office was simply covered by standard HSBC processes, so the extra customers would have cost very little extra.

I presume JL paid JLFS a significant commission on in-JL spend, which is perhaps what kept the thing viable.

Yes, I am sure they would have done - with the whole idea being that creating a John Lewis branded card would encourage more spending in John Lewis and Waitrose.

in the era when HSBC seemed to be getting in to bed with retail partners, M&S was another. The fact one partnership is ending and the other has being significantly scaled back rather paints a picture

I agree with you there, although I think it’s significant that the retailers HSBC chose to partner with were John Lewis and M&S. They didn’t do partnerships with just anybody, like NewDay. The general decline of retail probably makes such partnerships much less attractive, and in the case of M&S I think there were rumours that M&S and HSBC couldn’t agree a price between them to continue. HSBC wanted to be paid much more, M&S felt they were getting the “valuable” M&S brand and didn’t want to (and also couldn’t afford to). So they split the difference and cut the most costly parts of M&S Bank - branches and current accounts.

Relatively low, as the customers would have been mostly “in good standing”, credit-wise, so you wouldn’t have had to deal with a large number of defaults or customer service issues.

Most of the technology and back-office was simply covered by standard HSBC processes, so the extra customers would have cost very little extra.

That’s not really what I meant, I meant the cost of sending a physical card out (which is a more expensive process than you might imagine), sending paper statements (more likely given the JL customer base) as well as all the application paperwork HSBC love so tenderly. Interchange commission alone won’t be covering those basic costs without a significant amount of spend.

Just because HSBC had the backend systems already doesn’t mean there was no cost to JLFS in using them.

The sort of customers you describe are likely revenue generators as they’re the ones who’ll be paying interest, late payment fees etc.

True, it is the case that “bad customers” are more likely to generate income through interest, extra fees (for late payment, etc) and general account mismanagement. However, much of that would-be profit will then be eaten up by extra costs in pursuing payment, defaults and write-offs, additional need for customer service support and so on.

I basically agree with you that interchange costs would not have covered the operation, but overall I expect HSBC would have made a modest (although steady and reliable) profit from the arrangement because of the fact there were likely payments to them from JL as, effectively, commission for JL and Waitrose spend.

The technology cost wouldn’t gave been nothing either, obviously, but it would have been far cheaper for HSBC (due to economies of scale) than setting it up from scratch.

Isn’t that around £5 per contactless card? It may have reduced since contactless became standard, so not a huge cost.

Isn’t that around £5 per contactless card? It may have reduced since contactless became standard, so not a huge cost.

Sounds feasible - to put that in to context based on that (completely made up and probably too high) 0.075% net Mastercard interchange commission figure that small cost would take £6666.67 worth of spend to cover that notional card delivery cost.

Putting a piece of paper in an envelope and getting it to a customer costs about 50p and would take £666.67 worth of spend to cover.

I hope this illustrates my point that there is no money to be made from interchange when any half-decent reward is paid out.